Completely new to Unreal and thought tutorials would be useful, I’ve followed this tutorial exactly as stated and it doesn’t work. I’ve now spent days researching and watching others and still have no idea why this isn’t working.
The tutorials I’ve watched are Virtus Learning Hub tutorials on main menu creation (youtube).

Every button works, I just cannot get the start button to load onto my level and disappear.

I’ve attached a picture of where the tutorial has gotten me to so far. 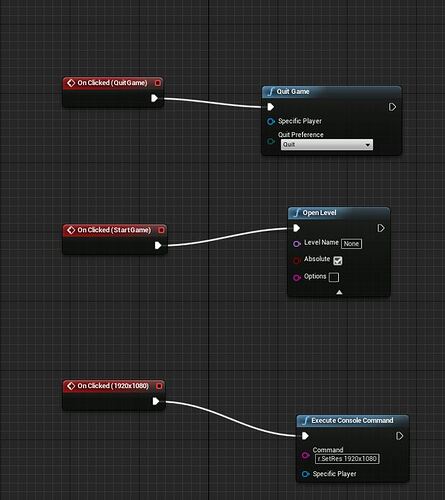 Any help would be appreciated!!

The level name has been set correctly, multiple times I had just deleted the blueprints another tutorial explained and those also did not work so I had just added the open level node back in.

If you have a level named “none”, it should load it but you need to remove the menu.
After your load level node connect a remove from parent node :

If you are directly controlling the character when the level is opened, then you need the 2 last nodes on the picture. The first one allows you to control the character and the last just removes the mouse cursor. But this only depends on your needs

Still seem to having the same issue, the main menu is not disappearing when the start button is pressed.

THANK YOU SO MUCH!!!

I’m happy if it works! Now you must investigate to know why your map doesn’t open

so the problem is if you open your level “none” and remove your widget, your menu widget just will spawn again because your level blueprint - begin play will fire again

so to solve this you need a entire map only for your Main menu where you create your main menu widget and call other maps like “none”.