What about something like Character* _Character? IIRC, you use this as an input in one of your examples.

Think of pointers as a box that contains a number;
This box is a value, contains something inside:

The number inside the box is the address of the thing that pointer is pointing to, in this case a ACharacter entity. The address number in the box is where that character lives in the RAM of your computer.

A reference is a label you give the actual ACharacter, or to that box with the address of the ACharacter.
When you access a label, a reference, you are telling C++ compiler to use the object you named that label. The compiler just picks the box and use it…

When you access a box, a pointer, the compiler will pick the box, read the number inside, then it will go all the way to your RAM and finally access the ACharacter living in that address.

But references contain no value. They just give identity to something that actually exist.
Because they hold no value, Unreal Build Tool assume that you want an output pin that is accessing something “named” that label.

You can also give a label to a pointer, not just objects, so:

Above, you have the obligation to tell the compiler what is the object that label is representing.
That is something of type ACharacter* you gave this label while in the body of this function.
The actual ACharacter* is found outside the function. You can’t change the label you gave the box.

Unreal Build Tool assume that you want to use this label as an input.
But it is going to scream at you if you never give a box for this label to be slapped onto, while in the body of the function. Because labels have no value… Unreal is going to tell you:

But you get an error because you’ve promised you would not change the number inside MyCharacterA box. For the compiler, _Character is simply another name for MyCharacterA.

UPARAM(ref) tells Unreal that you want a label as input, but you will not promise that you will never change the number address in the actual box or the state of MyCharacterA.

Thank you for such a detailed answer. I think that now I know enough to be dangerous

I’ll practice for a bit using your example code as a guide. I don’t suppose the C# version of the plugin will be ready anytime soon…

It’s really hard to make all the things I want to do with only Slate + Mono.API.

So I started to implement a SLN Generator for Visual Studio Code, which is very light weight external editor and is supported by Omnisharp servers of C# analysis.

In case VS Code is installed, we can launch the external solution for deeper C# analysis than what I have in-editor (I have no MSBuild running with Unreal Editor, but VS Code does).

MSBuild can scan scripts, and also can actually scan any referenced DLL and their types.

The best thing is reference counting!
Here it detects that I am no longer using ‘state’ anywhere anymore: 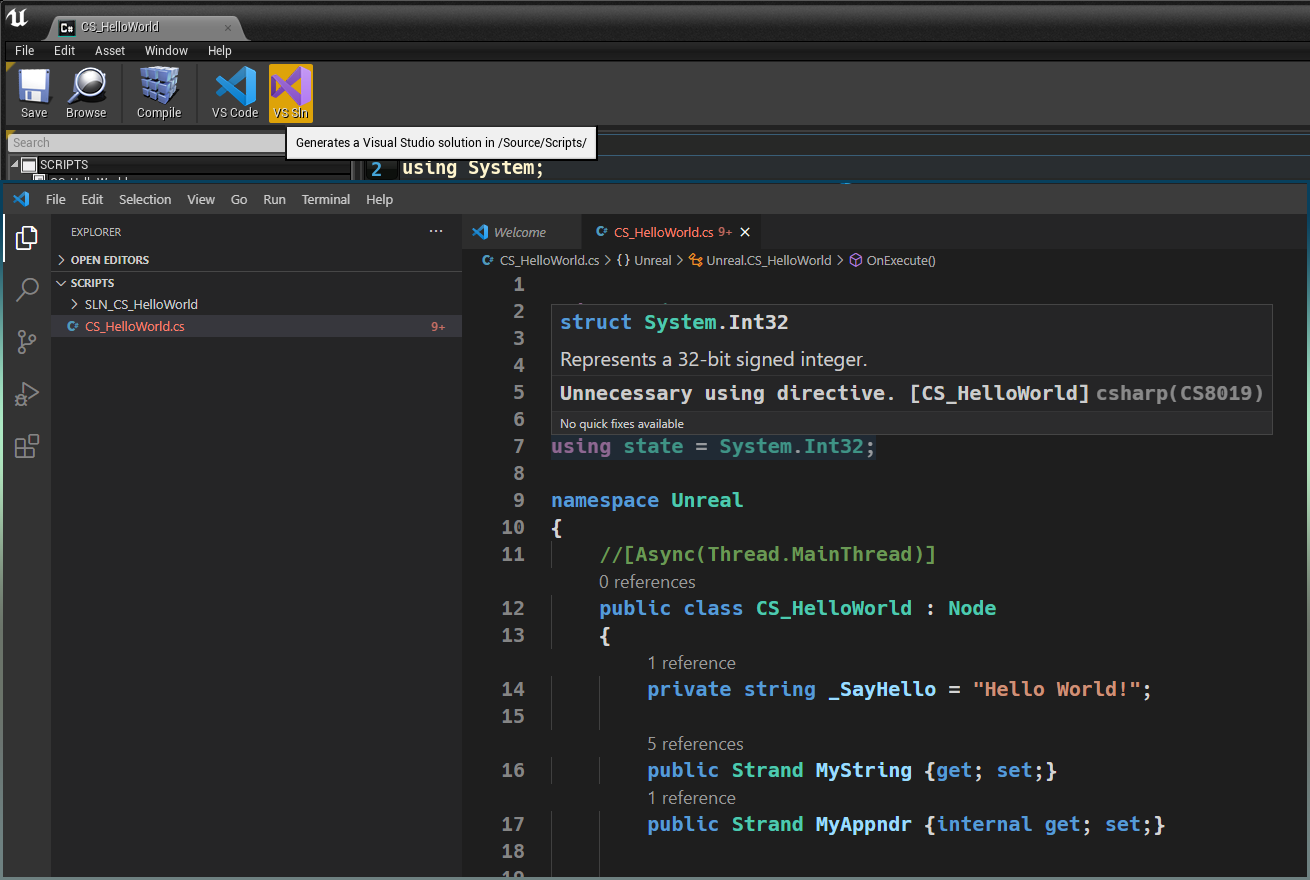 Heh… figured out how to add custom filter categories to asset browser.
Also got importing of C# scripts from drag & drop working:

Implemented a basic “Diff” tool and added a few more toolbar actions for launching on Visual Studio, in case built-in code editor or VS Code are not enough

So, I have ported this plugin to Unreal 5. Works fine, the C++ engine adapted well to UE5.
However, the C# architecture that I have built for this plugin, there’s some serious blocking changes in the core of Unreal 5 that makes it impossible for me to compile C# DLLs within the Unreal Editor now…

I suspect I will be forced to drop the C# project and wait for Verse scripting, I have done all I could with the C# VM, but it just won’t load any CS DLLs anymore on Unreal 5, and blocks the Editor from launching which is a no no no.

So for now, I move on and keep support for the C++ node only.

Hello,
I tried adding your plugin to my project, but failed.
I created a new blank cpp project, added the plugin, then created a blueprint and added a magic node with one of your presets. This is the error I get when I try to compile:

What am I missing ? Sorry I’m kind of new to this.
Thanks

What am I missing ?

You have to add the runtime module to your project’s Build.cs file.
If you don’t add the module dependency then your game module can’t find the classes:

Well now that is what I get when compiling… Sorry if this is supposed to be obvious:/

That’s what your copy of these files are complaining about.
I think you have outdated assets in \Plugins\MagicNode\Content\Examples.

I downloaded everything from the marketplace yesterday though. Should I get these from your git ? I was interested in the alphabetical sorting node.

I downloaded everything from the marketplace yesterday though. Should I get these from your git ? I was interested in the alphabetical sorting node.

You can just delete the “MGC_Awake_Start_Update_Stop” source files and the node from that Examples folder I posted above. Then compilation should just work.

I don’t know why that is outdated on Marketplace, I have updated everything before submitting to Epic the latest version.

Thanks a lot for your help. I will try this in a few days when I get back to my computer, but that should fix things!

If you plan to stop development on the C# version, would you consider releasing it on Github for use “as is”? I expect to be using 4.26 for quite some time, and I don’t need to do anything complex with it.