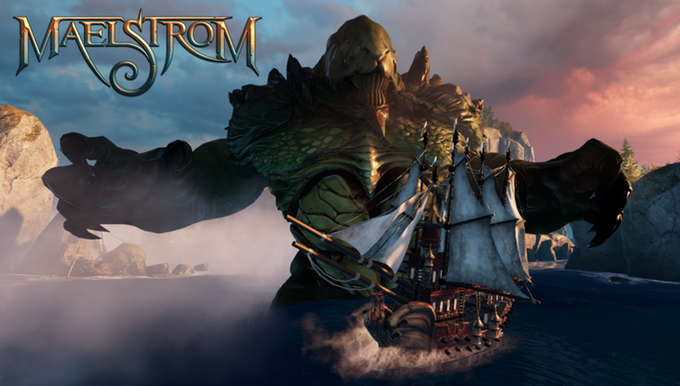 On behalf of Gunpowder Games I would proudly like to announce the Kickstarter campaign and first reveal of the game we’ve been working on: Maelstrom! I have been working with this team for almost three years to build a multiplayer game around fast paced naval combat that takes place in a fantasy universe with humans, orcs and dwarves. In this game you enter online battles with customized ships. The combat mechanics revolve around firing cannons at long distances, changing ammo types to target enemy sails or crew, ramming other ships and boarding them to kill their crew. Ships excel at different aspects, but customization allows you to effectively deviate from their base play style. Unlockable crew mates offer additional bonuses, while switchable captains bring unique activated abilities. Fog of war and team shared vision encourage faster ships to scout areas for enemies, while the bulkier ships capture and hold objectives.

The multiplayer gameplay is currently very stable and single player content is well underway. We still have a lot of content to produce, visuals to polish and audio to add. Specifically, we want to create a story campaign to build the world, hire professional voice actors to make the captains and crew come to life and make all ship customizations visible on the ship. Please consider backing us to make this possible!

The game is made with Unreal Engine and I remember development started back when the engine was still at version 4.7. Not once did the team regret choosing UE for development due to its great features, constant updates and to my liking, the engine being open source and Epic’s openness to user-submitted bug fixes. This all resulted in a great continued development experience for which I want to thank not only Epic but also the great community members that contribute to the engine or help people out on the boards. You have also helped me out on many occasions, thanks!

If you have some time and the game concept interests you, please check out the Kickstarter page and share it with whomever would be interested in this type of game. Thank you!

Looks fun and interesting, and like the art style.

Thank you, we have some great artists (core and contracted) working on this. Some of them might be up for contract work. If you would be interested in knowing them shoot me a message.

Thank you, we have some great artists (core and contracted) working on this. Some of them might be up for contract work. If you would be interested in knowing them shoot me a message.

Thanks Shao, will come back to this eventually. However, have to secure funds first

Thanks Shao, will come back to this eventually. However, have to secure funds first