I’m going to start building game assets. Before I start, I want to understand the high-poly/low-poly workflow.

I tried searching, but maybe I didn’t know what to search. Looking for some tutorials/lessons on understanding the process.

I’m assuming that a new low-ploy model must be rebuilt from a high-poly one (and root low poly wouldn’t match the resulting high poly), right? Except with really simple meshes.

Anyway, any links for me to read through would be a huge help.

There are different workflows for people depending on the asset being created and what they need to make.

If I’m doing a hard edged surfaces I’ll keep my low poly asset and then bake the high poly information to that model.

If I’m doing more organic models I’ll work with a high poly then use retopology tools or a polygon crunching software like Simplygon or 3Ds Maxes Mult-res modifier.

There are plenty of modeling tutorial sites if you search Google with terms like: 3D Modeling Tutorial

The best thing to do is to just start modeling and see what works best for your workflow. Start with simple assets and work your way up to more complex objects. You’ll run into roadblocks and bumps along the way but this is par for the course when learning.

I totally get where you’re coming from not knowing what to search for. A year ago I started learning 3d art. Something you’ll find out very quickly is that most of the tutorials on the subject revolve around showing you how to use the software. For me that was a great place to start, but to really get going on making things I started looking for speed modeling videos which, while not tutorials, show you step by step what people do to make models(tip: I use a YouTube downloading site to download these videos and watch them in super slow mo in VLC player). Like any art form there are two sides of learning, knowledge and skill. You can watch five 30 minute videos to learn HOW to use Maya, but it will take a lot of practice to get good at it, there are no shortcuts.

(The rest is for characters specifically)
6. Set up a rig in Maya using Humanik and bind the skeleton to the model

There is a lot to learn, and I’m still getting used refining my workflow, but that should at least give you an idea of the general steps that go into making a game ready asset with a high to low poly workflow.

EDIT:
Also to more directly address your post, for the specific step of retopology to a low-poly model check out this video that explains the idea of it. It should also give you a good idea of what is entailed. Also these days, poly counts are such that with a low poly model+normal maps projected from the high poly version, you can make the low poly model look almost identical to a high poly model! Seriously blew my mind when I was looking at my first character which was a 3 million poly sculpt next to a 8000 poly version with normal maps. 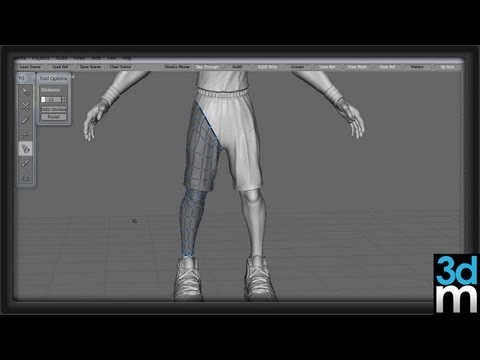 Well whats low and whats high is constantly being redefined and what should be done is based more on context and making sound decisions than it is about a budgeted number but decisions should be made based on proof of concept and practical application to avoid over optimization.

As an example our first batch of player models we stuck with a budget of 10k assuming that it will give us a higher performance envelope, and in the process trading detail of design, but as it turns out we figured we can go four times as much and use UE4’s optimization features to scale down detail to throttle game performance up and down. The only trade off is a larger download.

How high can you go? I don’t know but on my list of things to do is to get a player model in and running around with at least a million polygons. Kind of like stomping on the gas to figure out how fast your car can go.

The better ideal is to start high and work backwards instead of staring low and settling for second best.

To clarify for you, the low & high poly do not have to have same axes position/orientation, non the highpoly or low poly need to be dereived from the respective version. You can have 2 meshes to transfer between that have no relation with one another.

There are many approachs, depends on your style, as well as what object you wanted to transfer the normal map.

For character, I will use a low poly model as base, send to zbrush, subdivide, & then project the high subdivsion version to the low division version.

For an object like a cup, I may make the low poly version (call it CUpLowPoly), then make a copy, lets name it CupHiPoly, then add edge loop and details where need, smooth it (via subdivide) then transfer the details from CupHiPoly to CupLowPoly. reason why I did not just directly subdivide the CupLowPoly, is because the shape may be over rounded when divide, & not the shape you wanted, a common problem if the polygon are not evenly spread.

For some complex shapes, that you may not have an idea the final look, you can start high, & sclupt away, & use a combination of remesh/decimation/dynamesh (in Zbrush) to create a low poly version that represent well enough of the high poly model.

There are a few things that I want to know about this process such as. Does your low poly model need to be the exact same shape as your high poly. When you have small extrudes on your high poly can that be baked to your low poly.

I have a column (I am working on a ruined temple scene) and my low poly is hard edged and about 22 polygons of just cubes to get the basic shape of the column. My high poly has ton’s of detail on it going into the thousands of polygons. Could I still bake the information from high poly to my low poly? My high poly is also subdivided too whilst my low poly has no subdivision at all.

The short answer is, the bake will work, and it will probably look SOMETHING like what you want (in fact a somewhat common normal mapping trick is to “float” some details off of the mesh, and let the bake project them onto the mesh; the differing bounds won’t cause it all to collapse in on itself like a neutron star and fail spectacularly or anything).

The long answer: Baking (normal maps and AO maps, I assume) encodes information about the angle at which light hits the surface, but NOT profile or parallax.

What this means, in practice, is that you can bake the details to your cylindrical column, but it will only look correct at the piece of the column directly facing you. The sides of the column will appear to be a flat cylinder and all the details will start to look crappy at such an extreme angle.

Ever see those people who paint those crazy 3D scenes on sidewalks? Baking maps is like that. At the correct angle, it looks amazing, but at the wrong angle it looks preposterous.

Normal mapping is really best for details that sink rather than pop; consider the cracks and bumps in a brick wall or wooden door. These details don’t affect the overall geometric profile of the object and don’t suggest detail that we’ll see much of anyway at a side-on glance.

So for your column example, I would look at things like making the low poly have less-smooth indentions cut into the column, really simple shapes for the buttress elements (or whatever you call them, I don’t know column terms), and use the normal map to add detail and smoothness to those. Think of your low-poly as being the raw “cut” of column and the normal maps as being the “etching” of bas-relief-type stuff into the surface.

Save the pure flat cylinder model alternative for a lower LOD, don’t rely on the bake to transform a simple cylinder into a complex asset.

Wow man thanks for the great advice. I thought this was the answer to get the great looking models you see in games now. I guess though I may be restricting myself too much when it comes to polycount. I mean I want some really nice assets like AAA stuff. I am still relatively new at modelling so I am constantly learning, I am the sort of person (embarrassed to say) that needs a little ‘hand holding’ with this kind of thing. I need advice which is spot on, I am still unsure how low poly you can go and how good the bake will be on the low poly model, I guess I will have to try it.

I was thinking of taking the route of going nuts on the column in like 3D Coat or Zbrush then use that to do re topology and get my low poly version that way because then I know the bakes will work (if that makes sense). I have never tried this workflow but really eager to see what results I can get out of it because I am getting to the curious stage of modelling where I think I can try new things based off of what I have learnt, which is pretty much the foundational things and basic stuff to modelling.

The cage approach isn’t a terrible way to think about it in certain terms.

But like, consider a door. The hinges (especially bolts and such) technically protrude off of the door a bit, but if you were to bake that down to a flat rectangle it would probably look pretty good.

Is there anyway in UE4 to make automatic determination which 3d assets will be use for current platform . Sorry on my bad en. ( low for mobile - high for desktops )