Again, it feels as if Datasmith isn’t robust enough to support works in progress, only finished works… (but it’s beta, I know).

I’m getting repeatable crashes on re-imports after I’ve re-worked the models a bit in Max.

The workaround now is to just delete everything from Unreal and do a fresh import, but as my other thread indicates, that may take some time.

The model I’m working on is highly sensitive, so I can’t share it in a bug report, and since this doesn’t always occur, I can’t make an example project either.

I need to get this finished today, but I will zip my project in its current state as well as the datasmith file+folder so hopefully I can repeat this in the future if someone wants to take a look at it.

when it crashes, do you send the crash report logs?
if you added notes in it with your name or let us know your epic games account we can try to find the reports and see if we can identify the causes of the crashes.

The crash report has given us an idea of the cause, and we’re hoping for a fix in the 4.22 version.

Impressive! Looking forward to it, thank you.

We found the culprit and fixed the crash locally. However, this is caused by a strange situation:

objects that had a base material are re-assigned by the re-import a material instance. The change of asset type causes the crash. So we are wonder how that can happen. Do you recall what manip you did between the first import and the re-import? That can help us.

Ok, I discussed this with the dev team and here is more information on what causes this:

When Datasmith reimport assets, it tries to create them in a subdirectory and assigns them to actors. In this perticular case, the existing asset (lets say a master material) is getting overwritten by the reimport process by a new asset type (a material instance).

When datasmith tries to replace an asset that has a different type, it crash. We beleive it is probalby because the project started in 4.20 and then got upgraded to 4.21 (release at which we started to make material instances).

To work around the issue right now, deleting the materials in the datasmith folder and reimporting should work as the “replacement” situation won’t occur.

Do you recall what manip you did between the first import and the re-import? That can help us.

I was most likely creating new multi sub object materials and re-assigning material slots in Max w Vray, trying to reduce material count, but also probably merging in some new mesh objects (I have both the project and the datasmith folder from that time zipped and preserved, so I could look and try to figure out exactly what I did).

We beleive it is probalby because the project started in 4.20 and then got upgraded to 4.21 (release at which we started to make material instances).

I don’t think that is possible, because this particular project is only little over a week old, and I believe I uninstalled 4.20 before this one began.

It’s also already done now, so it was a very quick little VR demo we pulled off for an exhibition. I’m very impressed that Unreal just ate the 5+ million poly dual engines we threw at it, on top of physically simulated water. I didn’t even generate any LODs or bake any lights (no time). I mean, the 1070 laptop our sales guy had to use struggled a bit, but still I didn’t think it would work as well as it did!

ok thanks for those pointers we will search more

for the perf, wait until 4.22 we do automatic gpu instancing now and draw calls are reduced depending on the scene.

I don’t think instancing would have helped in this case, because I used the merge tool like crazy… but I guess I should have added LODs 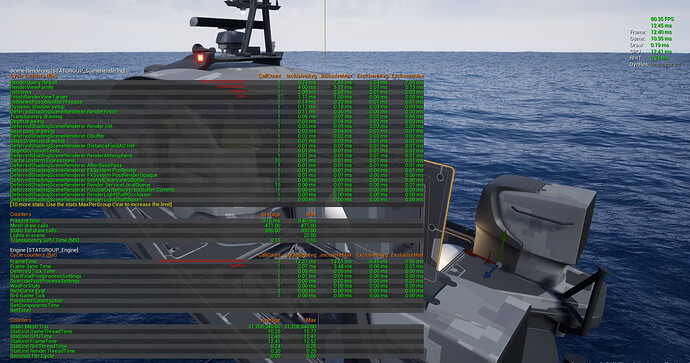 Ok, I discussed this with the dev team and here is more information on what causes this:

To work around the issue right now, deleting the materials in the datasmith folder and re-importing should work as the “replacement” situation won’t occur.

For whatever it is worth, I could make this UE crash happen repeatedly trying to re-import an object for 3ds Max 2018 to UE 4.21. It was just a simple stool that had vray materials on it. I did what you suggested here and it fixed the problem. Yes, I did let the crash report go out. I am sure 4.22 is fine but I thought I would post this for whatever help it would be.