It appears that I’ve lost all the Input Actions and Input Axis to my VR file.

I’m still new to UE, so I have no idea where or how this occurred. But it seems that if I try playing my game in the Editor/Desktop, using the WASD keys still work. But if I try to play in VR, UE will crash.

It seems like the issue is focused on the MotionControllerPawn blueprint that comes with the VR feature pack. See all the warnings in the attached image.

I tried deleting all the files and folders within VirtualReality and VirtualRealityBP from that feature pack, then reinserting the feature pack within my project. However, immediately the yellow warning signs reappear within MotionControllerPawn blueprint.

This is the only file that has this issue; I have other projects in process that use VR and do not have the input axis/action control errors.

Any ideas to what happened?

Go to SteamVR Input in the toolbar. It’s (usually) above the viewport. From there regenerate actions manifest, and controller bindings. after you finish regenerating both reload your action manifest and it should remap the controller for you. from there you can select launch SteamVR bindings dashboard to bind each action to a set controller button

Same issue here.
Can you give me more detailed guide for regenerating?

Same problem, someone can help ?

I recently had a similar problem where bindings suddenly disappeared.

After adding new action bindings under Project Settings > Engine Input > Action Mappings, I had to:

I’m not sure if I understand this correctly yet, but I got the impression that this is what those buttons do:

Apparently you only have to regenerate controller bindings if you only add some new default bindings for existing actions, but I feel like there might as well be a single button that does all three at once.

Anyway, here is a video that shows some of this workflow. It is a tutorial for the SteamVR Input plugin, but as far as I can tell this part is identical when you only have the SteamVR plugin. 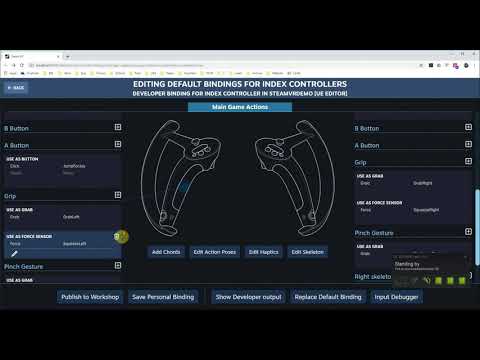 I hope that helps