Let’s say I want to model something like this (not my model but easier to show): 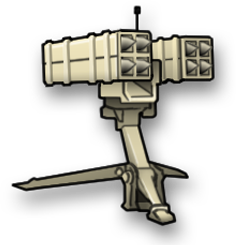 I want this to track the player then shot missiles at him. The idea is to not animate in a 3d package (Blender in my case), but use blueprints for it.
Questions:
-There are actually 4 components that can move relative to the others: the base (stationary), the central part (yaw), the missile holders (pitch), and the rockets which just fly. They are of course not connected by edges, but should these be imported as separate static meshes? (and then composited in a blueprint)…or there is a way to have them as one object and still animate somehow.
-If they are separate static meshes: what is the better practice: have all different objects have it’s own texture map or put them into one big (I’m sure it can be done both way, but which approach is better?)

You will want to have separate meshes for each component. Depending on how complex it is you may want to have multiple meshes for each component. For instance the base might be two objects. The front facing leg and post might be one piece and the side supports might be another. If you set both models origin points the same in Blender like at 0,0,0 then in the Blueprint you can set the location to the same number for each object and it will align perfectly.

For the moving parts pay special attention to the origin point. This will be were the object will pivot from.