Looking for help with editing recipes that use mortar and pestle

I can’t, for the life of me, figure out how to change the output number of Cementing Paste. I thought I changed everything I had to, but no matter what I try the recipe never shows up in the pestle. Could someone possible do a walkthrough or a video or something, or is that too much to ask? If I can get this working, then I can make new recipes that require the forge and stuff. I know I should learn on my own, but it’s tough when I’m a beginner at this and know literally nothing.

Unfortunately you’re in the same boat as well, all of us. Even guys who know UE4 seem to struggle sometimes with the way they’ve set things up. That being said…

When it comes to recipe’s I believe that they are all actually stored in the primal game data. Did you make sure to edit the recipe in there?

are u after the actual mortar and pestle inv cause that components in the mortar and pestle? or in turn the PrimalItemResource_ChitinPaste is cementing paste… check Custom Crafting Benches - ARK: Survival Evolved - Unreal Engine Forums

I can get the engram to show up in my list. Obviously named Super Pestle for now.

I get it to place as the new pestle. 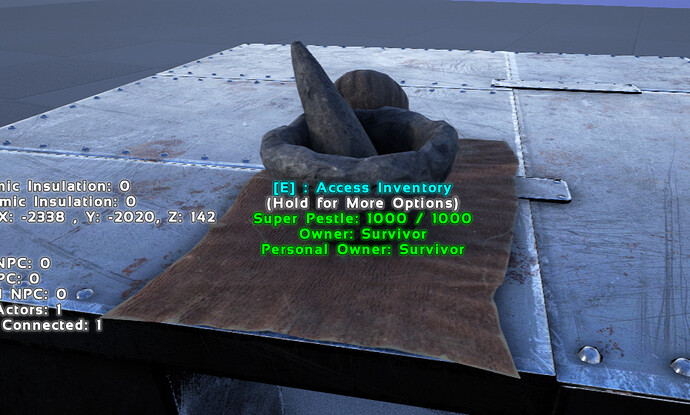 Now my only issue is to get the inventory to recognize the new pestle.

I’ve changed the PrimalInventory_BP to only show the one engram I want, which is called epoxy. I set it as a new item in the PrimalGamedate blueprint, and everywhere else I think I need to place it. Yet looking at the “super pestle” blueprint, it’s not showing the inventory pointing to the right place… 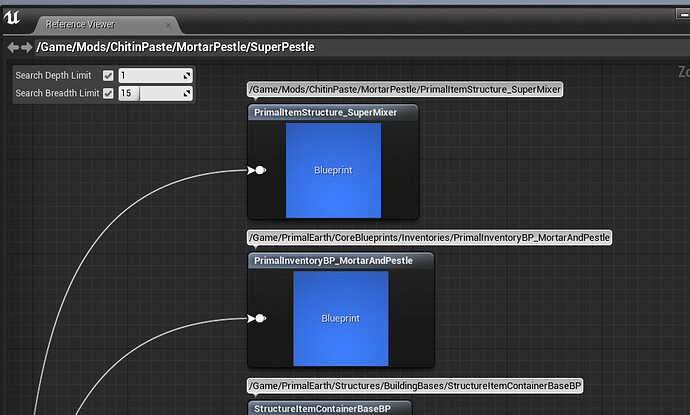 I might be missing something super easy, but my brain is almost fried lol. Any ideas as to what I’m messing up?

Just realized I messed the names up. Need to fix that.

Getting a new mortar and pestle to work for me was a chore and a half lol…That being said you shouldn’t actually have to mess to much with doing any actual blueprinting. You’ll need to dupe a primalinventory_bp for the mortar and pestle and reference it under your new one. Make sure that the items you want crafted in the pestle have, under “requires inventory item to craft” or something like that, your new pestle referenced correctly. Let me know if this helps at all.
-Mr.Pwndabear