Interpolation between animations in an AimOffset is working fine in the preview window but not at all when you are ingame. It will go instantly to the value you set. 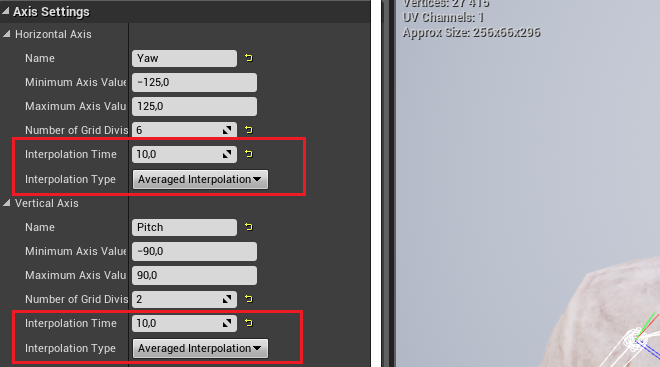 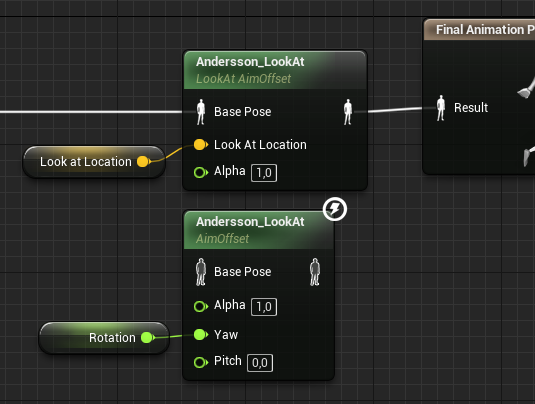 This could be a million different things, lets see your blueprints.

the simplest code is to just have this in the animation graph and have a world location as input:

This works, the character looks at the world position. But when i change the position the head instantly snaps to the new position, with no interpolation. If i use the “AimOffset” node instead the interpolation works.

That’s because you are just setting the look at location, you need to interpolate the location and feed it into your variable as it interpolates. Here is a epic tutorial that goes over how to setup exactly this. I think Wes goes over it somewhere in the middle, but I would highly recommend checking out the whole video: No they actually use another node called “LookAt” not “LookAt AimOffset”. I understand that the “LookAt” node instantly moves the head but the “LookAt AimOffset” node is a child class of the “AimOffset” node (looking in c++). They just haven’t taken the interpolation values from the parent class into consideration when moving in the aim offset graph as i think they should have.

I submitted a bug report. I’ll just have to use the “AimOffset” node that has working interpolation until it’s fixed i guess.
Thanks for the help.

The bug report ticket is here if someone want’s to know if it’s fixed yet: