I’ve been unsuccessful in packaging my app for ARcore. The app works fine targeting iOS ARKit. I understand there are some differences in setting up the AR session config and have added the AR Augmented Images Database. I have also tested the images with arcoreimg and got a score of 100.

I’m not sure what else I can try. I kinda hoped this would be fixed in the release version of 4.20 but I’m still stuck.

Thanks for the awesome work!

PS: Can we get an AR section in Answerhub, please?

This is caused by a missing .exe. You can view this in the Output.log, filtering for errors after attempting to perform a build.

You can workaround the issue by:

I reckon this should be logged as an issue, but I’m not sure how to do that.

I should’ve added that I’m on a Mac.

I tried that workaround but it still doesn’t work.

The Google AR SDK contains the binaries for Linux, Windows and Mac. I cannot test on other platforms, but perhaps try the same process and of course choose the Mac binary. You can hopefully validate the path unreal is expecting the binary to be in by checking the Output.log

Hi, I’ve tried to copy the .exe into the engine folders and now I should “Clean out” my project.
can you specify what I have to delete in the Intermediate?
Do you mean starting over the whole project?

Hi, i’ve just managed to succesfully build and run AugmentedImages project on android using custom images for tracking. I’ve used bone-stock-straight-out-of-the launcher 4.20.3 WITHOUT the arcoreimg.exe. The trick for me was to use sample images that had the same parameters as those in example, so i’ve used 4728x3264 8bit RGB jpg on compression level 9, and it worked like a charm on SGS7. When i’ve used 2k res png it failed to build, so maybe the file format is the problem in this case. Hope this helps anybody.

Did you edit the project in any way?

nope, clean install of 4.20.3 (and clean install of android works 1R6u1 from extras folder), extracted google sample to my usual projects folder, opened by double-click the uproject. Then i’ve opened the augmented images data asset and cleared it by clicking the bin icon, and then i’ve added there my image (which was prepared as i described above). Packaged for ASTC and installed via USB cable and install.bat. Tested on SGS7 and SGS8.

when UE4 tries to build with this string it will cut it right at the first space, it should be arounded with “” !!!
So I uninstall UE4 and install it again but now with C:\EPIC\UE_4.20 … … no space! now the path is C:\EPIC\UE_4.20\Engine\Plugins\Runtime\GoogleARCore\Intermediate\ARCoreImgTemp\

Now I have No trouble creating an image database with the example from google (AugmentedImages project).

Well this could be it. On all my machines i have UE installed to a ‘custom’ path without spaces. 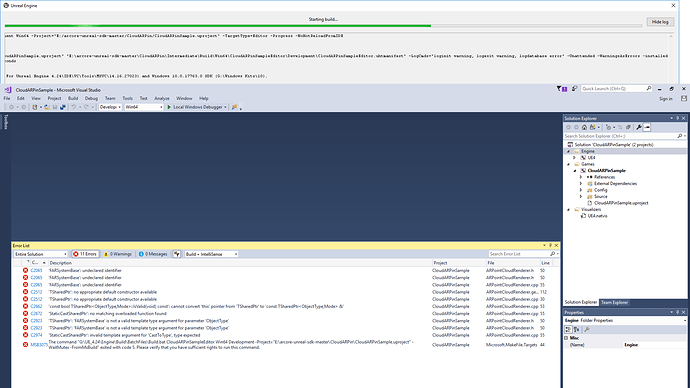