So… right now I can create an array of player selected characters and spawn them in the level. It works perfectly.

The problem Im running into is that instead of starting off in the combat level like I have been for testing purposes, I need to start off on my ‘team select’ level then when the player clicks the launch button it is supposed to remove the existing widgets, load the combat level and associated widgets, along with the array of characters…except… it doesnt actually spawn the characters. If I disconnect the Open Level (by Name) node, it works fine.

I thought this might be a timing problem, as in I need to delay a few seconds after the level loads before I spawn characters, but putting in a Delay node didnt solve the problem.

I ended up putting print strings after each node. What I found is that it seems to break when it hits the Get All Actors of Class node where it creates an array of TargetPoints which I use to spawn the characters. The print string should list each of them, but it doesnt. 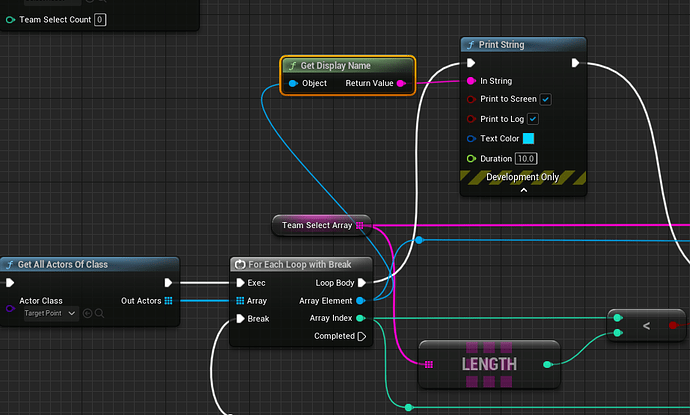 I can see the spawned Target Points in the actor list when the game is running. They are yellow … when i dont do the load map part they are white. Not sure what that means. I believe its temporary. I know characters when they load appear yellow.

I still wonder if they arent there by the time the Get All Actors node triggers because the level is still loading.

It’s pretty strange. But there is no way when something exists but can’t be obtained by the get all actors of class node, we something missed

May the force be with you
Can you call these actors if you start the game from this level?

Can you call these actors if you start the game from this level?

Yep. Works fine until i try to load the level from somewhere else. The entirety of the spawning graph exists in GameMode, , but… i also notice that the Combat Widget doesnt load either.

And that actually is before the Get Actors node. The Print Strings I set up for debugging work… so super confusing.

Whats interesting is it says PersistentLevel, not the TopDownGameMode level… though it clearly is that level.

If i start off in the target TopDown map, and effectively just make it reload itself, the Print Screen nodes to the end of the sequence print correct data but nothing spawns.

If I start off in the desired map, and then load the TopDown map, the Print Screen nodes past the Add to Viewport node dont do anything. Either way, my GetMap/PrintScreen output shows Persistent Map.

I had the wrong GetMap node, changed it to Get Current Level Name.

After this change, the map name output is correct. So that rules out the wrong level.

Whats interesting is it says PersistentLevel, not the TopDownGameMode level… though it clearly is that level.

I guess that is somehow connected with the sublevel system, in my work project we have a lot of such stuff for each level, it works like layers, on some layers is only geometry, on some layers are only game objectives and respawns, etc, I’m not a level designer and don’t know much about that, but maybe it helps you.