We have a FPS on Early Access (Storm United) and while the windows build general performance are fine, the Linux and mac builds are to be honest still very bad.
We are testing the game on all platforms on the very same computer so its not a hardware issue.

I made a wrong assumption by thinking last year that by the release of the SteamBoxes (next month or so) the Linux builds would be well polished.
Unfortunately, I’m afraid we might have done a mistake to support those platforms, the work overhead is substantial and our forums are riddled with mac and Linux complains.

Bug wise those platforms are still buggy and prone to crashes but we have seen important improvements over the months, unlike the performance area where we have seen little progress to close the gap with windows.

This said, I want to be able to say something about performance to our users for example where the performance drop comes from and hopefully what’s being done by Epic about it.

Any other performance related information is very welcome

Thank you and keep the great work flowing ^^

Could you give us some details on what hardware are you testing on and Linux and OS X version you use? Also, some numbers that’d tell us how bad the problem in your game is? Also, do you know if on Linux you’re running the game in OpenGL 4.3 or 3.2 mode?

In general (and not counting the hitches caused by rendering new materials - more on that below), in our demos and games the performance on Linux and Mac is rather OK, disappointingly worse than in Direct3D on Windows, but certainly not very bad (on average about 85-90% of D3D). That said, we just had a report that the new Unreal Tournament’s performance is currently much worse than it was, so we were going to look into this very soon. Our suspiction is that the game started to do something that hits the slow path in the drivers. I suppose your game could have a similar problem. I’ll make sure to let you know what we find.

As for stability, if you have any call stacks, please attach them here to make sure we’re aware of these crashes. Thanks!

And to answer your questions:

Hi and thank you for your insightful answer and sorry for the delay, I had to wait for the scheduled test run with the team to confirm some numbers.

FYI:
Our test Mac and Linux boxes are equipped with an i5 3470 3.4 Ghz CPU , an NVIDIA 650 2gb and 16Gb of ram.
The Linux box runs an Ubuntu 14 with latest official NVIDIA Linux drivers
The Mac is running the latest OSX Yosemite and the latest NVIDIA web drivers

We are running the game with the default OpenGL 3.2

In our case, I would say the performance of those platforms is more around 70-80% of what windows does in terms of framerate when the framerate is stable. This said the framerate isn’t as stable as on windows (I feel its mostly related to some memory related loadings).

I would indeed be very interested to know what caused the latest UT slowdown.

I will report the future crashes and attach the call stacks in separate posts for sake of clarity.
On macOS we currently have an annoying situation where on 3 large maps, the stat unit Frame value goes up to about 70ms, Game goes to about 8ms draw 9ms and gpu is at 35ms. We then get a complete system crashes requiring a reboot (we’re not getting any useful information from them atm).
It happens at some locations of the map. If I’m careful and rotate the camera at the right moment I can see those value shoot up and then go back down without a crash if I rotate back fast enough.
The large maps also crash on linux during loading.
Is it possible there’s some kind of GPU memory overflow?
We have r.streamping.poolsize set to 0, it works great on windows. On mac even if I set it to 500 it will still crash. Are there other console commands we can use to limit memory allocation?

On a side note, speaking of mac, is there a way or trick to have a proper splash screen? At this moment we are getting this:
http://puu.sh/l1Jdr/d511ad7926.jpg

Additionally how do we change the default icon of macOS builds? I don’t see any macOS platform in the project settings: http://puu.sh/l1JAb/18b6dd8545.jpg

Thank you very much for your answers

On Mac you could try forcing ANSI allocator (see FMacPlatformMemory::BaseAllocator()) and also disable our crash reporter. To do this, modify runGameThread: in LaunchMac.cpp, change this:

Perhaps system crash reporter would have more luck grabbing the call stack and will shed some light on what’s wrong.

As for the splash screen, I fixed this recently, for 4.10. We weren’t handling images with DPI != 72 correctly. You can fix it in your build in FMacPlatformSplash::Show(), add this line:

As for the icon, I’m confused, as we definitely have Mac platform properties in project settings. Maybe only in Mac editor? I’ll check. 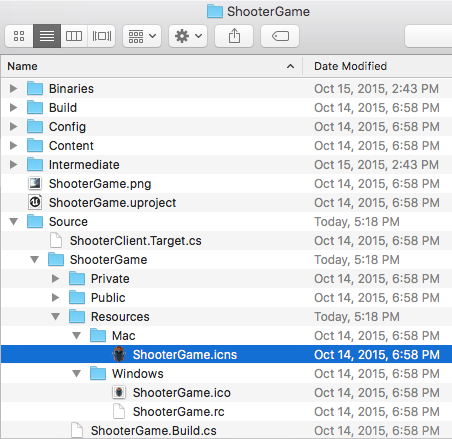