So far, my character got the basic third person jump blueprint and animation blueprint. What can I do to limit the jumping ability to left and right only and by double tapping the A or D (or bottom face button + direction of left stick for the controller) keys? Also what about a pause in between jumping (like 3 5 seconds) before being able to jump again?

Which part are you having trouble with? HOw to get it to recognize the inputs for the strafejump, or how to get the pawn to move in a strafejump?

Both basically. I mainly need help with getting the character to move in a strafe jump and be able to adjust the distance of the jump as well.

I don’t know how Unreal Tournament does it, and I’ve never done it, but if I were making this feature from “scratch”, I would probably take the following approach:

Alright, I took your approach. I got the double-clicking working. I can’t seem to get the second step working properly. I can make the character launch into the air but it’s more like an odd rocket instead of a leap left or right. I also can’t get it to figure out the direction of the leap using the enum. Here are some screenshots. 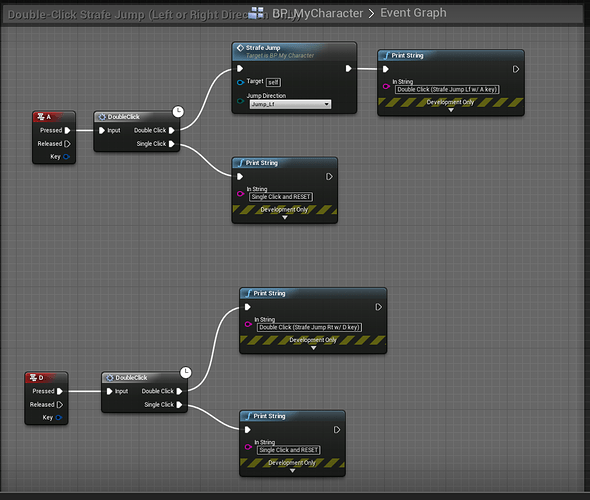 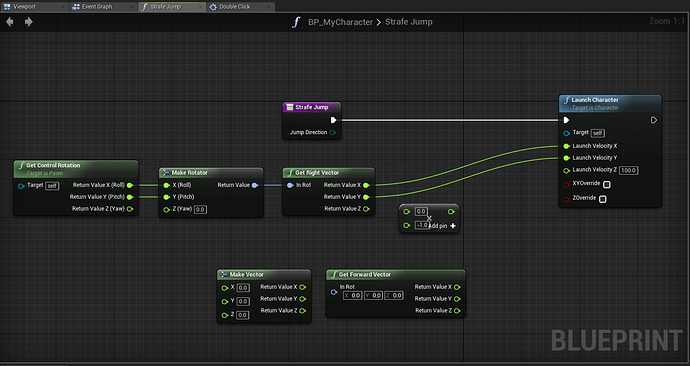 Well it looks pretty close to what I had in mind although the double-click is way different but that part is working so i won’t worry about it.

Your jump direction I think what I would change is where you did that makerotator. You left off the Z (yaw) which is the most important axis for determining which way the char is facing for a strafe jump. In fact it might be better to makerotator with 0 on pitch and roll and ONLY use yaw.

Alright, I updated with get player controller and left the pitch and roll to 0 while having the yaw connected to the make rotator. My character just makes a very odd hop going up. Shouldn’t it be at the Pitch? I mean, going left or right? I don’t quite understand if you can explain why it should be the yaw.
I’m using the dummy model that comes with UE4 for example. No animations for leaping yet.
Here’s what I got so far:

Ah okay I know what’s wrong. You need to multiply the Right Vector values by something big like 5000. The Right Vector is a unit vector so it is launching him at a speed of 100 in the up direction and only 1 in the right-hand direction.

Still not working when I add a multiply float * float node from the right vector to the launch character yaw node. It still does the bunny hopping which is odd. What’s weirder is that if I just get rid fo the multiply node and put in 5000 into the launch node, it will make the character launch straight up very high. Also, I’m so confused on how I can make the enum tell the blueprint if I’m going right or left. I can’t seem to go to a branch node in the blueprint. It’s basically a if that than that like in C++.

Make sure the multiply is AFTER the Get Right Vector, but before the Launch Character.

To make it choose right or left, pull a Select node out of the Jump Direction pin, and for the Left direction you multiply the Right Vector by -1 before multiplying by the 5000, but for the Right direction just use the 5000 without also multiplying by -1. Alternatively you could just choose either 5000 or -5000 to multiply by. Comes out the same.

Hm, yes, I do have the multiply after the Get Right Vector and before the launch character.

I created the select node which got enum values input/outputs. I converted the output to float to multiply by -1 for jumping left. I’m still not getting anything different. The character only hops up into the air for a half second when I hit the A key twice and strafe jump.
Here’s my progress so far:

I have been working on this again, I managed to get the jump working. The problem was the velocity should NOT be at Yaw. Yaw takes you straight up. For left or right, you need to focus on the pitch! Just need to figure out how to make it determine to wither if I’m jump left or right. I have an Enum (see above in older reply) Here are some screenshots, still need some help:

This is incorrecton just one part. Multiply the ENTIRE Right Vector by the large number (and maybe make it even larger. Lets try 20,000), and use the X and Y from the product of that multiplication. You have it where it is leaving the sideways vectors at a value between 0 and 1 (not multiplied) so no wonder the character does not jump sideways. You shouldnt need to multiply the Z of the right vector by anything as you are doing in this screenshot because you will not be using the vertical part of the right vector.

Remember that in Unreal Z is up and down and Y is sideways. Unlike Unity.

I’m a bit confused. Is this reply for my response/post from 6 days ago or last night? I know that Z is up in UE4. I had to make the Z a bit higher like 300 so the character can move off the ground. I had the Y (Pitch) see to 1000 which worked. The character now strafes right when I hit the ‘D’ key twice. I’m trying to figure out how to have the function multiply by -1 if I hit the ‘A’ key for left twice. I’m having trouble figuring out the Enum function, do I even need an Enum for left and right? It doesn’t seem useful. I do want the flexibility to edit it in the future if I want forward and backward jump.

It is for the six days ago one because that screenshot is closer to how I would do it.

To prevent the strafe jump from activating while the character is off the ground, there are some varuables and events in Character Pawn classes that you can use.
I remember one event called Landed which fires when the character has been falling or has jumped and then their feet land on the ground again.

Then just check for that variable in a Branch node at the beginning of your strafe jump action or just before calling the strafe jump function, and if it is True then do not proceed.

I got the midair part done. I just needed to add a not falling to not bool at the beginning. I got the enum select node and multiply -1 node. I’m still not understanding how this blueprint even communicates with the Enum or how it even knows that I’m jumping left or right or knowing what keys are left or right jump.

Excellent. You pass the enum in from the A or D keyless event if it detects a double click. The A double click calls strafe jump with a left enum and D calls it with right enum

Can you give me an example? Do I create a custom event in the strafe jump function?