What worked for me was deleting the data cache:
C:\Users######l\AppData\Local\UnrealEngine\Common\DerivedDataCache

I had this problem as well and would like to add something:

I imported a few static meshes that for some reason didn’t automatically add their materials, one mesh had two Material Elements but I left one of them empty since it didn’t appear to do anything.
And that was what caused the problem, as soon as I added a material to the second Material Element for the Static mesh then light built just fine. 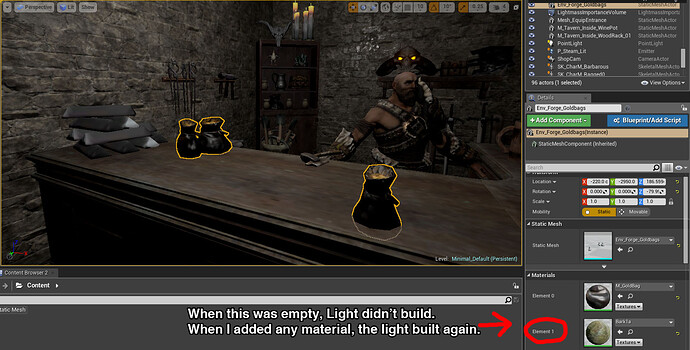 I hope this helps someone!

In the end I was trying deleting assets one by one and while checking to see if I could do a light build. I eventually found one that SEEMED to be causing the error. But once I reloaded the original level (without making ANY changes or deleting anything)… it worked fine. I’m no closer to understanding why the swarm was failing to kick off, but it seems like if you screw around with your level enough it just decides to work :-/

At this point last year I didn’t have this Wiki setup yet, but it may be useful for troubleshooting most Swarm Agent issues:

In my case, it was because a Sphere Reflection Capture was referenced in the level BP !!!

Have the same problem. For all projects, even for new projects. Cannot rebuild lights because of this error.

so are u saying that code compiled engine is totally useless?

So far deleting the data cache hasn’t worked for me. This one level I have has done this twice to me now. Very Annoying. What I did to fix it reasonably quickly was use Shift + click to drag and select half the assets in my level using the Outliner list and copy them and then delete them (without saving of course). Then rebuild the lightmass. If it builds you know its an object in the deleted half of the level. Press Ctrl V to paste the half back. Then copy and delete half of the half you first deleted to continue to narrow it down by process of elimination. Hopefully I an easier process can be found soon.

This worked for me! thank you very much!

It’s not. newbprofi said it in a comment - as long as you build UnrealLightmass from your UE4.sln it’s gonna work. Had the same problem but that fixed it.

This has also worked for me, thanks!

This is what fixed it for me.
More specifically, I used the following steps:

This was a huge help, I was checking every ■■■■ asset in a 40+ gig project, if you have this problem, definitely do that ^ works…

This worked for me. I was starting to get annoyed.

Swarm Agent has a log which spits out an error when you get the “failed to kick off” message in the Editor.

The error is that a file in the Swarm cache being used by another process. Leaving procmon running while starting the build, this is the complete list of processes accessing the file in question:

As you can see, only UE4 itself is accessing the file, not even Windows Defender is causing trouble. Could it be that two threads are trying to create the same file, colliding with each other and keeping Swarm from kicking off?

Sometimes I managed to fix the error by just deleting everything, quitting without saving, and reloading, but not always. The error is very random, and often after hours of trying to track down the object in question using the methods above, it turns out to be an object that baked just fine before.