This is something I’ve been working on for the past few month to see what I could do.

Admittedly I prefer spending my time with blueprints and less with everything else.

Let me know what you think.

hrhr nice, but why final?
Around the shieldmechanics function you could build a game.

maybe a bit too much god-like abilities for a game?

I gotta say, this is pretty **** cool even if just concepting out things while learning. Well done.

Looks awesome, I hope you keep developing this! I’d like to play it one day.

maybe a bit too much god-like abilities for a game?

Never. We have no god-like abilities in real life, never too much for a game.

Nice AI!!! I like it. I’m trying to sit down and write a comprehensive AI system myself.

I like use EQS (Environmental Query System) to have the AI run to cover when under fire.
Also, you know most games don’t have realistic, tactical gameplay because the player is generally childish.
See here
You can implement that since your player character has powers, evening the playing field.

I do that a question though:
Where do you put the damage indicators? on the Character BP or the AI BP?
I put it on the character to take damage, but then I have to pass the info to the AI BP so I can update the Behavior Tree.
It works, but I wonder if there is an easier way.

Hey man thanks for the link, I’ve been reading that for the last 2 hours now. Seems strange but it makes a lot of sense, dumbing down the AI makes games more accepted.

Anyway my AI are very simple. If they can see the player they run at them until they are close enough then they shoot. So I didn’t actually use a behavior tree at all.
The enemies don’t take into account the players health either so there’s no communication at all from the enemy to the players character.

That’s cool.
Take a look at my video.
I used the behavior tree to actually run the animations. I didn’t even need an anim blueprints. It’s really powerful once you get over the (light) learning curve. The curve is similar to learning BP.
Check this. 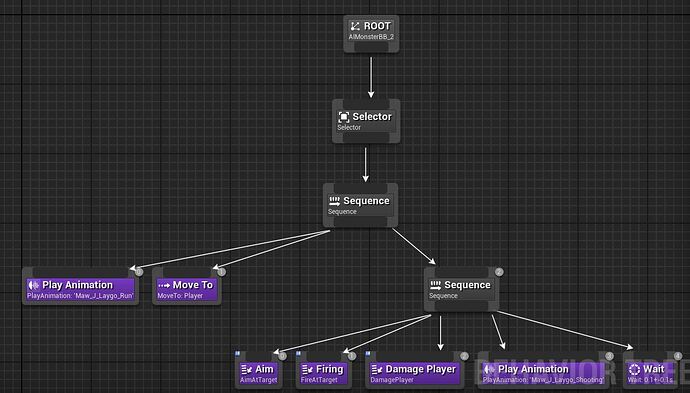