Level Sequence does not work properly when combined with World Composition

In trying to use the new Level Sequence, I’ve discovered that it doesn’t seem to work when combined within a World Composition. The Level Sequence plays at its original location irregardless of the translation that should be applied when it is used within the World Composition. This differs from the legacy Matinee behavior which does properly apply the translation. I have verified that this behavior exist on both the 4.13 and 4.14-preview2 releases.

To illustrate the problem, I created a project with 2 levels(Level1, Level2) under a folder WorldComp. And I have another level called MyWorldComp as the world composition.

Within each level, I created one Matinee movement and one Level Sequence movement. I’m only showing the screenshots for one of the levels but the other level is the same except I used different meshes. The floor mesh is the standard 400x400 starter content floor and it is located at 0,0,0 within the level.

In each level blueprint, I wired the begin play event to play both the Matinee and the Level Sequence. 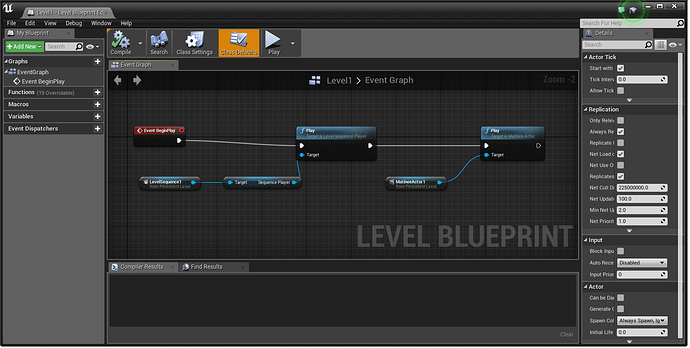 Now within the World Settings of the MyWorldComp level, I enabled World Composition and then opened the Levels and World Composition dialogs. In the World Composition dialog, I created the MyLayer layer that turns off the streaming distance and then I added the two levels into that layer. After that I set the levels such that they were not in there original locations. For Level1 x=0, y=-800 and Level2 x=-400, y=-800. Now when I play the level, the Matinee objects translate correctly(shifted properly) but the Level Sequence objects move in there original untranslated(not shifted) position. 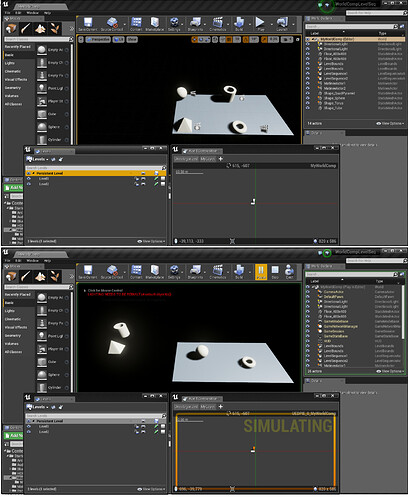 In order for the Level Sequences to be really useful in large worlds, the behavior exhibited by the Matinee is obviously preferred. Hopefully this is the plan. Otherwise it would be nice to mention this inadequacy in the Level Sequence and/or World Composition documentation.

So we have a jira issue in place for this as UETOOL-747. It cannot be publicly listed as it isn’t under the UE project, but we are working on it. Thank you for reporting this though.

In my comment on UETOOL-747, I asked if we should create a new bug and one of our engineers agreed. I’ve entered UE-38454.

Is there a work around for this? It still exists in 4.17 which means the level sequencer is completely useless in our game. I see the bug status is backlogged. Any help on how to get around this would be great.

Currently any meshes we have added to a movement track in sequencer will disappear off to the origin of the level when the sequence is triggered. Any help would be appreciated.

How do you make actors move relative to position in Matinee

Is there any update in regards to 'Relative to Initial' functionality being implemented back in Matinee? Seems to be a major loss not having it. For exemple: How to start a matinee at the exact position of the ending location of a first one?

That’s indeed a workaround, attach the camera to an actor in the scene, then it’s location will “shift” too once you start recording, as it “shifts” with the attached actor