Are there any plans to improve how the launcher handles downloads (i.e. resuming, updating, etc.)? There appears to be no system in place that scans for (and detects) previously downloaded directories/files, resulting in a frustrating and inefficient process that wastes time and bandwidth. I’ll provide a couple of examples.

Can the launcher be improved in this fashion? If not, are standalone installers a possibility? In addition, will more file servers be allocated to alleviate the lack of bandwidth during update roll outs?

They can’t do a standalone installer because of subscription, but I think there should be an option for it to scan for files that already might be there and download the ones that are needed and reconnect everything.

Expanding on my original post, the way in which it handles multiple engine versions is also a mess. For example, after updating to 4.1.0, I uninstalled 4.0.2 from within the launcher. I also removed the duplicate marketplace projects located in “Documents\Unreal Projects”. However, the launcher doesn’t recognise that the projects no longer exist and simply lists them as “not ready” or “repair”. In addition, the “Memory Game” and “Effects Cave” directories are listed as 4.0 instead of 4.1 (edit: my mistake, it appears that neither of these have been updated for 4.1). Surely, I can’t be the only one who finds this to be an unorganised mess?

Ben85, thanks for your feedback!

My apologies for the clunky state version handling and downloading is currently in. It’s been a topic of internal discussions and it is not an area we are happy about either.

Version handling, downloading, backward compatibility, and upgrade flow for both launcher and GitHub installs are on our mind and we love hearing about user stories and thoughts on how we can improve things

As he said we realize that the current experience for managing your engine versions and content in the launcher is not the intuitive or informative solution that you all want and need. It does provides access to the awesome Engine and content updates in 4.1, but at the cost of a lot of manual work by you to organize and manage it.

And to reiterate, we would appreciate your feedback in this thread on how you would like to work with updates and new content to help us better hit the sweet spot on usability and functionality.

Here is an odd question, is the Launcher code also on github or is that still internal? So basically if someone wanted to help improve the launcher, etc?

Here is an odd question, is the Launcher code also on github or is that still internal? So basically if someone wanted to help improve the launcher, etc?

I most certainly think is not, because if it was, the subscription model wouldn’t really work.

I really appreciate the replies Adam and Daniel. Personally, I like how the different engine versions (and the associated projects) are segregated via the drop down box. However, I feel the launcher could be improved in the following ways:

Automated Backup/Restore: Basically, a script that packages that necessary directories (“ProgramData\Epic”, “Program Files\Unreal Engine\4.1”, “Documents\Unreal Projects”) for easy installation on another computer.
Existing Content Scan: As mentioned in the original post, prior to download the launcher should scan the relevant directories (“Program Files\Unreal Engine\4.1”, “Documents\Unreal Projects”) for existing files and only download what is corrupt/missing (I’m unsure on the technicalities, but I’m assuming you’d have a list of required files and then run a checksum).
List Local Projects: The marketplace projects are already listed in (and can be launched from) the launcher, but it would be a nice addition to also list the local (user created) projects.
Project Control: Basically, the ability to open, manually repair (as it’s nice to restore the default project in the event of an accidental save, etc.), and remove projects (both local and marketplace). When a project is removed, this should be reflected in the manifest files so that the launcher doesn’t think a repair is required.
List Available Marketplace Projects: As a time-saver, it would be great if all available (i.e. free, excluding paid) marketplace projects (even if they haven’t been downloaded/installed yet) were listed to avoid having to go through every entry on the marketplace tab. 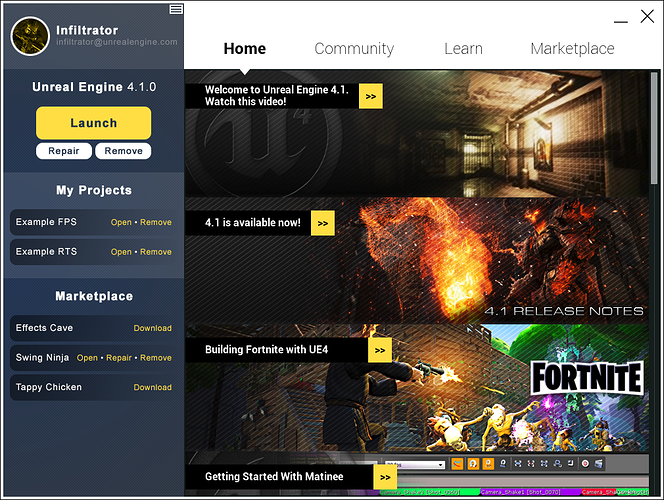 I most certainly think is not, because if it was, the subscription model wouldn’t really work.

Ah yeah…duh. Forgot about that portion of it…

@Ben85: I could see that, I have another post on the forum about adding in “My Projects” section. But also adding in a quick launch New Project, to pretty much have no need for the “Middle Man” window that pops up. Should also include an Options button to change target directory for the launcher to scan for projects. So if I had to move my projects to say a second hard drive for larger space, I would be able to say “Look over here”