First off I’ll say I’ve had this problem for over a year now, I’ve been working on a mobile game and now that I’m nearing the end I’ve been trying to launch it on my phone and test it. I’ve tried launching 4 separate projects one of which I tried in both version 4.14 and 4.17, the other 3 only in 4.17, one of those 3 also was a brand new blank project that I followed the steps word for word from the Launching Documentation provided by Unreal. Never have gotten it to work. I have all of my settings set to what seems to be correct or blank so they’re the default and my Codeworks has to be installed correctly because I installed everything from the 1r6u1 version and in the engine, the directories are set to the correct location. The project that I’m showing the error from here is in API 23 (because that’s minimum requirement for 4.17). I’ve tried launching with all different setting and always the same error. I’ve tried launching different quality settings (ASTC, ETC and all), I’ve noticed the “armeabi-v7a” part of the error and I’ve tried running on arm64-v8a and same exact error except ‘armeabi-v7a’ changes to ‘arm64-v8a’. I’ve tried everything, even hours of google searching and Youtube videos… Nothing works. My only idea now is that my phone isn’t supported, it’d be nice if Unreal created a list of all supported phones for Android. I can’t imagine my phone isn’t supported its a ‘ZTE Axon 7’ it’s a 2017 high-end phone, so I don’t know why it wouldn’t be compatible but that’s my only explanation at this point. Please please please any help would be very much appreciated! And please don’t just link me to another form, because I’ve spent enough time looking through them, unless it directly solves my exact problem. I’d rather receive direct help. 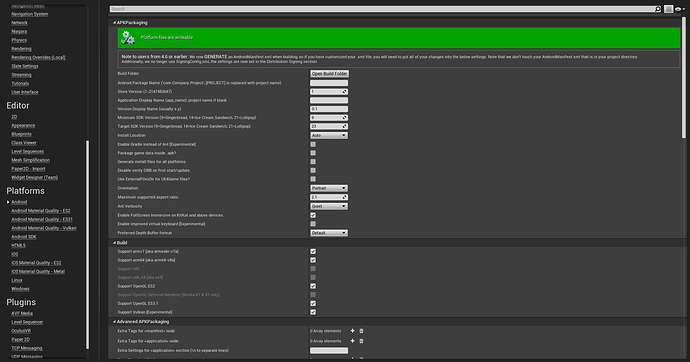 First, you dont have anything on Android Package Name, dont know if thats the issue but you should fill that one, next have you tried using 23 in mininum an 26 on target ???

Next, could you share a screenshot of the section where you set the paths?? this one: 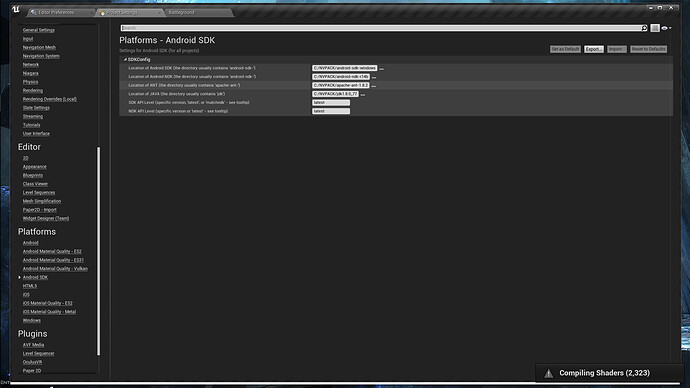 Also will be helpful if you share a full error log, that line of error i think is not where the problem is 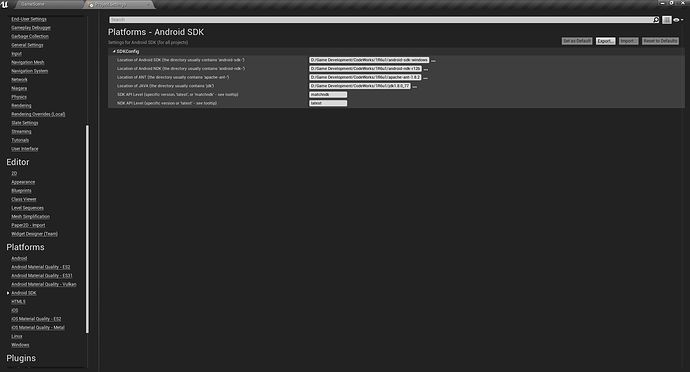 Ok so the NDK path need to be a path with no spaces, you have it on the folder “Game Development”, move the NDK to another path without spaces, then update the enviroment paths on windows and the paths on the Android SDK screen in unreal

WOW, so after over a year and hours wasted, it was A SPACE that caused the problem! I cannot believe it, I should’ve thought of that cause spaces usually ruin things but its just so miniscule I didn’t realize. It is working right now, it’s currently finished the 'Launching on “--------” step of launching and the game is on my phone screen currently so It’s working now. THANKS. I’ll still go through what I did though, first I changed the path to one without spaces then I tried it without changing the environment variables and It went past where it was messing up last time and then had another error of something about ‘Apache-ANT’ and a line above the error it said something like 'problem with target version ‘Android-19’, but I was trying to launch it as 23 or 24 so then I went and changed all the environment variables and I got that exact same error, so I don’t know that I actually had to change them. After I tried a few different configs and still kept getting that same new error I finally tried setting the NDK to android-19 since that’s what it said, and that’s where I’m at now with the game on my phone screen, finishing up (been going for 1 hour 30 min so far). I don’t understand why it has to be on android-19 though… my Phone is Android version 7.1.1 so Android N or api 24. And I read somewhere I think from inside the engine itself, it said using ue4.17 required no less than android-23 so why does it work on 19? idk, but its working so yay! But I can’t thank you enough for such the simple problem! Thank you thank you thank you

Glad that it worked, about the problem of android-19 i dont know what could be causing that, i work with android 23 to up and never had that problem

Good luck with your projects!