Hello. I made a laser beam and it working fine. I want it to make it movable like moving left/right etc. I tried SetWorldRotation/Location, MoveComponentTo etc and i didnt find any solution. Any thoughts?
I tried Timeline but I 'm not so familiar with thisalt text

Presumably you want the beam to emit from your gun?

It just needs to have the same rotation and world position as the end of the gun. This is also where you can do the line trace from.

No I dont want to do anything with the gun. I want it to move in the world (just the end of the laser beam left-right,up-down so I can avoid it with some stuff I created). In that case I guess i should change the Beam End point location smoothly or rotate the whole laser beam but I haven’t figured it out.
Moving the whole laser forward/backwards will help me too. I want something like this. 5:45
. If I rotate the BP, only the mesh(beam start) rotates but not the beam. 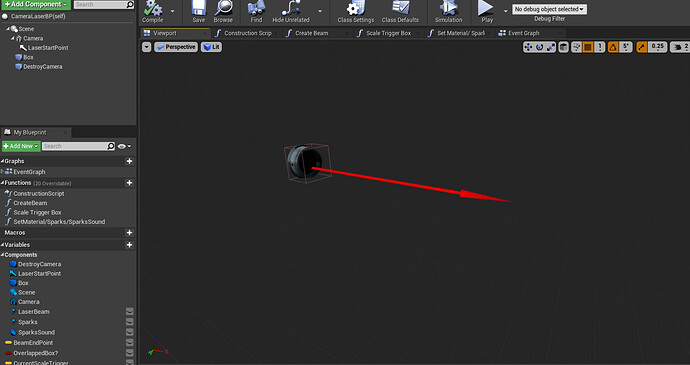 Can you show the BP?

So your logic is : we rotate the line trace and the beam is attached to it, changing the Beam End Point and it 's rotating via an event tick and not rotate the beam by itself?

If your trace works without rotating the BP. This is how to make it work with rotation. Give it a go…

I 'll try it. Thanks

Well it was not that hard. Line trace rotates smoothly. 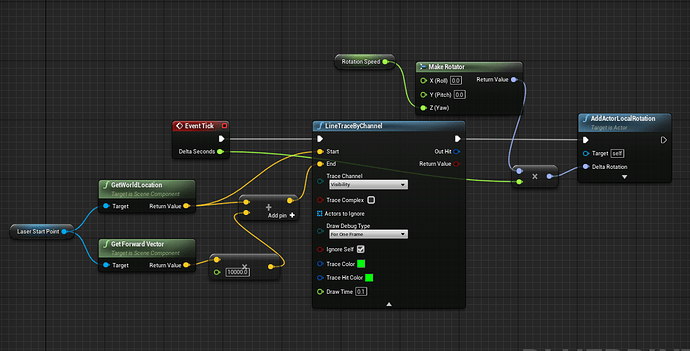 Yup, so you’re not using the rotation of the start point. Hold on…

Something along these lines:

Just saying. Every 0,1 sec I destroy the beam and recreate it, because I can’ t rotate it with some Add Rotations i don’t know why. I kinda get the result i want but i don’t like the programming-fuctionality behind this. Anyway, I 'll probably keep it cause it 's not gonna run in the whole game so I guess it 's ok

When you make then beam, attach it to the beam emitter component. Then, when you rotate the emitter, the beam will go with it…

Well all I had to do it stay away from my project for 2 days hahaha. I just had to create the bream once and then calling the Beam End Point function 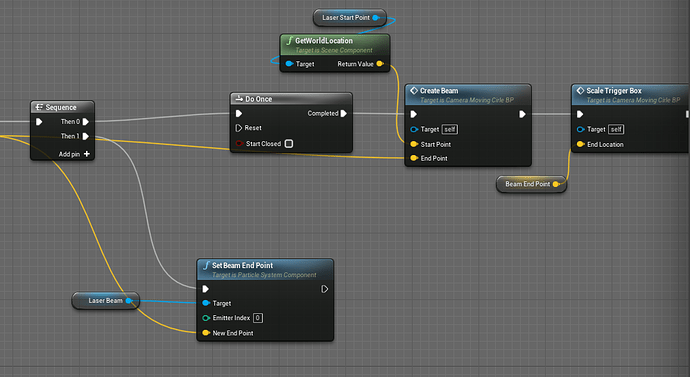 You were so helpful you 're doing a great job. Keep going.