Kona 4 HDMI Out not functioning from within UE4

I’m currently using the Kona 4 capture card and the AJA UE4 plugin, I’ve ran into some trouble setting up the HDMI out for monitoring an input/output stream when using unreal.

When streaming HDMI->SDI->Kona4->“Kona Control Room” my 2nd monitor picks up the SDI and sends it, through the native mini HDMI on the back of the card, out to my 2nd monitor (all be it the 1920x1080 stretched to my wide screen, but that is to be expected). 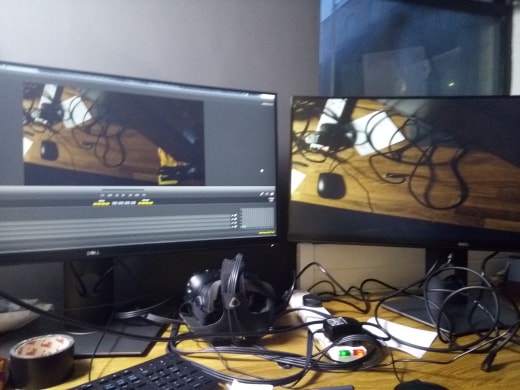 When streaming HDMI->SDI->Kona4->UE4 the same hdmi set up outputs a black screen (though an active black - suggesting a handshake is occurring but no information is arriving), whilst the stream is read into unreal via the AJA plugin with no problems - I have followed the IO quick start, set up guides and answered question threads: 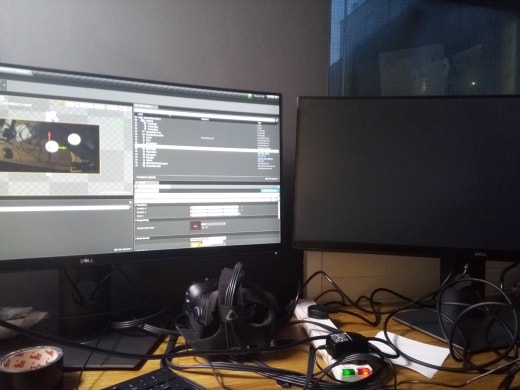 I’ve tried matching the pixel format on both ends to 8bit rgba, to 10bit rgba, I’ve made sure the FPS and Screen resolution match, manually genlocking, timecode and time stepping. I’ve attempted SDI 2 in port.

When I request the stream in from the BlackMagic to stop, I am presented with a spectrum of coloured bars - matching those atop the “error texture” for the AJA media bundle when there is no stream coming in, which makes me think I’m closer than I thought and there’s some setting I need to match in order to get the HDMI to display the stream, given UE4 doesn’t auto detect incoming signal properties. 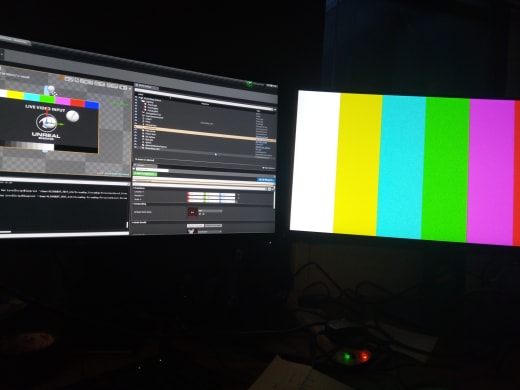 All to no avail - I’ve just ordered an SDI->HDMI in the hopes of running an SDI out from unreal through the MediaCapture I have set up (I can only assume that because I have no downstream device on the other send of my SDI I am not actually exporting from UE4 - hence why I am getting the uninformative “PingPong: No frames are available for channel # on device Kona4 - 0.” error.

Was unable to get the HDMI port on the back of my Kona 4 to ever output from UE4, however using an SDI Monitor and connecting it to the out SDI4 cable from my Kona allowed me to stream from unreal. I have ordered an SDI to HDMI to use on a standard monitor and perform capture.

I have also managed to perform simultanous (BlackMagic → Kona → UE4)->ActiveGameTimeViewPort->Kona4->SDI Monitor. So I have a stream being sent into unreal, augmenting my virtual assets and streaming back to the kona and to a monitor in a single. It would seem the “No Frames ar available” warning is a suggestion of lost frames and is still occurring every now and again during runtime.

Accepting answer as this is a reasonable way to stream HDMI footage from unreal, all be it through one of the SDI ports and converted and not through the onboard HDMI port.

I don’t know the Kona 4 card, we just have the lhe+ here, but as far as I saw the input/output ports “mapped” to the ue4 are just the SDI ones, I could imagine that this dvi and hdmi ports are not mapped or they maybe use another different port number.

You could manually try port0, port5 or port6 in order to see if any of them works by pasting this string into the output port you want to try. ie guessing if exist a port5: (DeviceName=“Kona4”,DeviceIndex=0,PortIndex=5) but I’m just suposing…

If AJA control panel doesn’t permit that kind of operation, most probably this hdmi port is not properly implemented in the ue4 AJA plugin and nothing can be done to “mirror” one of the sdi signals to this hdmi, but who knows…

I have a feeling you might be correct about it, given the port is advertised as a “monitoring” solution, I would almost prefer my current set up anyway, using the direct SDI and converting – feels less like I’m hijacking a feed I shouldn’t be using in production. Nice ideas with the out of bounds ports, I’ll give them a go, the AJA Control room is obviously set up to automatically output through the HDMI, I can totally see why this might not be configured for the AJA plugin.