Keeping the scale - Urban/City Design - From Zbrush to UE4

Hi,
I’ve been troubling with this issue for some time. Currently, I’m trying to make a city inside of UE4, using my own assets I made in Zbrush.

At first, I was trying to put buildings and street layout in Zbrush alone, however it’s not a program created for tasks like those, so due to problems with camera, working pretty badly when your meshes have a huge scale spread (like from city walls and parts of landscape 20km long, to simple skyscrapers 40mx40m) and also problem with making roads I’ve decided to try doing the thing inside of UE4.

The problem I’m troubled with however is the scale, I’m unable to keep things consistent. I’ve exported city layout from Zbrush, then I exported buildings, however the scale of those 2 meshes seems to be a lot different from what it is inside of Zbrush, where using a ruler I see that their measurements and proportions are correct. However after exporting those the scale differs.

For example, the part of the city layout (one huge mesh of the whole city "floor) is the road. In Zbrush, the road is 5 units (renamed as meters) wide, the building is 46m long. Inside UE4 however, checking measurements by using a top view and middle mouse button, the building is only by the look of it something like 15 meters long (or 1850 units to be precise) while the road looks like its 32 meters wide (precisely, 4000 units).

I really don’t get it, I understand that the measurements itself can differ from program to program, however that shouldn’t be the case when you are comparing proportions of those things. I do not know how to keep the scale right and I’m probably doing something wrong, however due to lack of experience I have no idea how to start solving the problem with that. And I’m sure I’m doing something wrong, becasue the fun fact is, that to get both the city landscape and buildings in scale, to the size of UE4 character, I needed to rescale both for the same number: 73600 times the scale.

Also, the side question while I’m at it, is there a good way in UE4 to measure up stuff you are putting into the engine?Unit One : A Simple 3D Ruler UE4 - YouTube seen a video with this, however there isn’t a download and the author seems to abandon his youtube channel, however it looked really helpfull.

Also 2: Is there a way to resize an object, a mesh you put into UE4 into the measurement units of UE4 you pick, instead of making it more or less blindly, trying to hit a good size playing with the scale slider? To lets say, import a car and set it’s length to exacly 300 units (from what I know, units of UE4 are cm) and let the rest of measurements fit due to staying in scale with the length?

Yuper scaling in Zbrush is strange. This might help 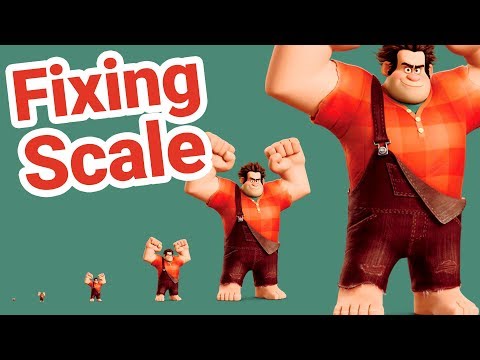