Keep losing the ability to add items to variables and arrays

EDIT: I’m able to reproduce this now - the items I was attempting to reference were in a folder in the asset tree that contained a “(” character. This was causing the issue!

I posted a bug report [here][1] but the problem turns out to be far more widespread in scope than I initially thought so I’m creating an updated report here.

Basically, after working in a project for a time, I lose the ability to add any of the following to an array or variable of that type as a default:

This is a complete showstopper!

I can see the relevant item in the list, but when I pick it, nothing happens: 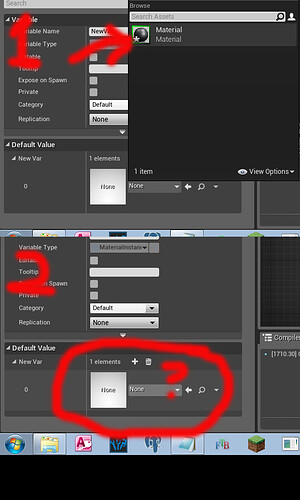 I encountered the error first in the Code-based FPS project when creating a custom struct. I was unable to solve the issue, and after testing to see if it was working properly in a clean project, I migrated my blueprints to the new project and the problem persisted.

Not knowing what else to do, I completely rebuilt my project from the ground up and low and behold the bug has reappeared. I can’t move forward, and I’m at a complete loss as to what to try next. The issue persists when I shut down and reopen the project and I have no idea how to fix it.

Thanks a lot for finding this bug for us. I’m able to reproduce it here at the office, which means I can now report the bug and we’ll get to work fixing it. I really appreciate that after running into the bug, you managed to find the cause and edit your post to include it. Great work!