Issues with the ADK and uploading my first mod to Steam.

I am new to using the ADK which after many attempts finally got to download using the Epic launcher. I am also new to Unreal engine which I must say is a HUGE difference over Unity which is where I have spent most of my modding time making mods for KSP. To get adjusted to the ADK I spent some time on the forums taking a look at references and seen one that caught my eye https://forums.unrealengine.com/showthread.php?84156-Ark-UI-Tutorial Which introduces you to the basics of UI modding. I run a ARK server and thought that this would be great to implement in our server so people could stop asking what mods we run and what our teamspeak info is. Now While I have been able to get it to work fully within the ADK I can not seem to get it to upload to steam. When I try to get it to upload I get an error Failed to upload it quickly flashes then goes off the screen. I am unsure what I am doing incorrectly but there seems to be something wrong with what I am doing and was hoping you guys could shed a little light on my situation.

Now not to overload you guys with questions or new threads I am also having an issue with the ADK 2 of them to be exact. First one which I was not getting until my ADK crashed once is a bunch of errors on startup. I clear them and they seem to have no effect on my ability to mod (or maybe it is why I cant upload to steam) but I am unsure how to fix said issue.

The second issue is I started working on a custom refrigerated feeding trough just to get acquainted to adding in new objects and messing with engrams. Now I remade the project and started a better folder structure with it. I want to delete the first one but every time I do it goes away until I shut the ADK down and reopen it. After the ADK has been reopened the old folder that I originally made returns. I can not seem to delete it for good. Below I have posted a screen shot of what I am talking about and put a red band around the 2 issues.

Thank you guys in advance for the help and I hope to become a regular here on the ARK ADK forums. 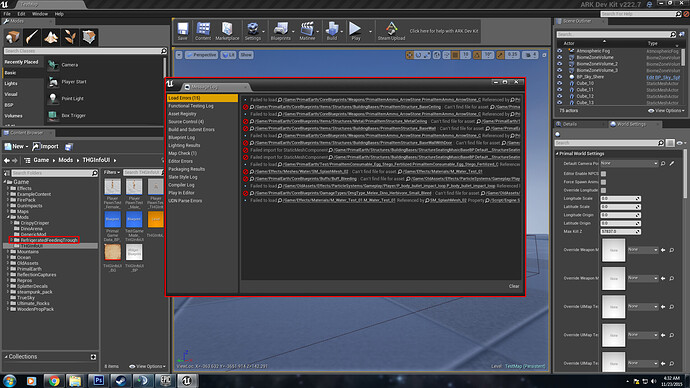 Update: I was able to fix the issue where I was getting all the errors in the viewport when I first opened up the ADK by re-verifying the files. I still am having the 2 other issues though.

Update number 2: I was finally able to get a screen shot of the error I am getting when I try to upload to steam.

Update 3: Sorry this is getting long but why answer questions that I have seemed to work out for myself. I was able to upload it to steam. My image for workshop was too large. I reduced it to 150x150 pixels and it uploaded with out an issue. I still am having the deleting issue.

I hope that this helps anyone new that is reading this thread that maybe having the same issues as I am having.

After a bunch of hours messing around I was successful in getting my mod to work in game on single player. I will next be testing it on my server.

Just delete the folder from the harddrive it’s stored on. The DevKit generally tends to store things still on the drive even if you delete them from within the DevKit, 7-8 times out of 10 it will not show them again in the DevKit, but it’s an severely unoptimised environment.

Without knowing the error that SteamCMD is giving you, there’s not much really to go on.

The most common issues with uploading are the preview image is too large, or there is special characters in the title and/or the description.

Thank you, I believe you answered my deletion question. As for uploading it to steam it was the preview issue. I just used a screenshot with out thinking of size restrictions. I was able to fix that about a half hour ago and it seems to be working now.