Looking at the mentioned file and line-number, I get the impression that this has something to do with the new support for double precision in UE5?

The project will crash before it can load, but if I edit the 4.27 to use an empty level as startup before I convert, I can get the editor to load the converted project in 5.01. At this point I can find my blueprints in the content browser, but if I try to edit them, opening some (most) of them will result in an immediate crash like the one mentioned above.

Does anyone have any ideas about what is causing this, or perhaps some clever tricks that can help me identify the source of the error?

Also converting from 4.27 to 5.0.2 with error: Erroneous pin subcategory for PC_Real: None

did you figure out how to troubleshoot this?

Not yet. I also upgraded to 5.0.2, but it didn’t change anything. I’m just keeping my projects in 4.27 for now, but I have to solve this at some point. I tried to recreate one of the offending blueprints from scratch, but there’s a lot of inter-dependencies that make it difficult to reach any conclusions… I’d be very interested to hear about any clues you might find about the cause of this issue. Google is remarkably silent, my own forum-post is the only relevant hit I get.

I have yet to solve it, however since we’re both having this issue, we may be able to help each other find out what’s going on.

I’ve been trying a lot of things & managed to get the project running, but when I closed and restarted, started crashing again.

Do you have the varest plugin?
What was the first version you had?
Is it related to a custom struct you’ve created?

Yes I have VaRest, although I’m not sure it’s “influence” could damage quite so many blueprints… but who knows, like I said, there are lots of links between BP’s. I’ve also made some custom structs, and I suppose they are good candidates; I mentioned the new double precision data types, and I suppose there are conversion routines for this that are failing to reach some value/variable somewhere. I don’t have time to test things right now, but I’ll be sure to post anything I discover when I look at it. By “first version”, do you mean the 4.27? It is 4.27.2

I'm having a crash in unreal engine 5.0.2 when I use a make array node and feed …it into a number array in the make json node, it will crash on compile. I'm not sure if it's an issue on your make json node, or if it's with unreal engine. Thanks for looking into this! Assertion failed: false [File:D:\build\++UE5\Sync\Engine\Source\Editor\KismetCompiler\Private\KismetCompilerMisc.cpp] [Line: 1088] Erroneous pin subcategory for PC_Real: None [error from make array.txt](https://github.com/ufna/VaRest/files/8960120/error.from.make.array.txt) [the make array to make json crash node snip.txt](https://github.com/ufna/VaRest/files/8960102/the.make.array.to.make.json.crash.node.snip.txt) ![image](https://user-images.githubusercontent.com/14854307/175102217-304481aa-3c38-4f85-8e9a-eb4fcb7d33c6.png) 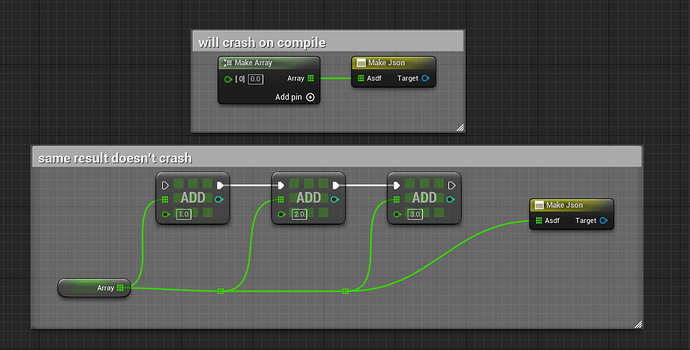 I don’t think I’m using that exact node, but the error-message is spot-on… perhaps some other part of VaRest is affected by the same issue?

Are you using a make array with numbers? If not, there may be some node in varest that’s not using the correct number input format yet.