Is there any UMG animation notify system, in UE4 ?

How can I triggers an event or something like an Anim-Notify , when the UMG animation reaches at specified frame , for example frame 36 ?

Now I did a quick search in my UMG and since I don’t have any animations yet I figured I give it a try but couldn’t find anything as a function or Event.

What I can think of is to use Timers and than get the elapsed Time in seconds. Now this example was just done quickly but I think it can work if the Animation is started and should get at least how long the Animation Update Event has elapsed since it has started. 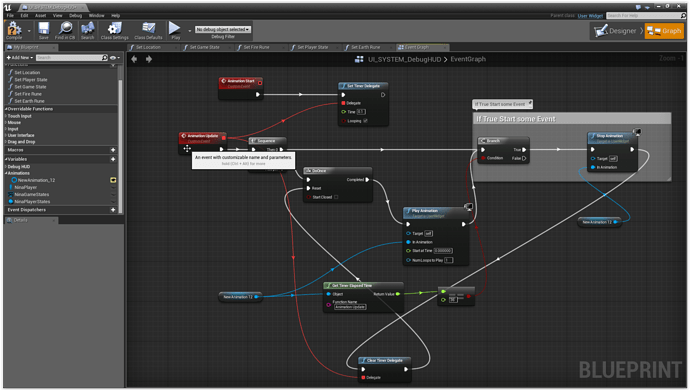 Oh I just saw that I put the Animation Reference into object of Time Elapsed. Just ensure its self and remove it.

If you’re looking to get a specific frame, you’ll want ticks, instead of seconds. But, one possible solution I found while researching, could be the use of a timeline. The combination of an Event Tick and a Timeline could work…

timeline works great for managing a single UMG animation from the owning actor that spawned the widget, but if you want an arbitrary amount of UMG widgets, each with animations that need to make decisions based on its current frame, it becomes more of a problem, because widgets can’t contain timelines.

animation notifies would be a nice addition to UMG animations, and im sure they are working on adding that feature.

If you could fire generic events from UMG animations: