Is Physic Constraint supposed to break?

I have a physics constraint setup between a weapon (static mesh) and a cube attached on the back of a character. Any time the physics stops moving the weapon detaches and just floats in the air. I had this problem with a lantern before.

Linear and Angular Breakable are unchecked.
So why does it still break?
Does it just not work? Or is something not setup right?

Linear and Angular Breakable are unchecked.
So why does it still break?

Sounds like a bug - youd have to test something like 4.14 where i know this worked fine to confirm if this is your setup or not.

Should it not work in such a dated version either, then your setup is missing something basic - like setting a value somehwere for either sleep or strength needed to break, or something more basic is going on…
For instance, the player capsule is colliding with the item, thus causing the constraint to fail (often the case with weapons, as you usually want them to collide to other players).

So maybe it’s a collision thing. I’ll look into that.
I can’t think of any instances where it failed on one that wasn’t attached to a player.

So I made a hollow box (can be hidden) which so far keeps it in place. 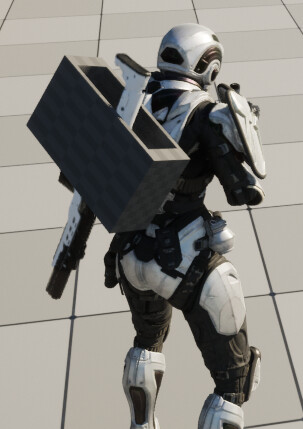 Although it has the odd moment while idle where the character moves slightly and it doesn’t. So not

yet but I’d say this explains what’s going on.

A simpler box with the top and bottom faces removed will also work.

Just add a wake command to your weapon thats based on the character’s (owner) moving speed.

When you attach/spawn it, you specifically set the owner.
From it, you can read some base values without casting, or you can cast and isvalid it to access more specific things.

Or, just disable the sleep value alltogether when you attach the item.
So long as you remeber to re-enable it to a standard value when the item is tossed/released, you should be good to go without hacking a container box around it…