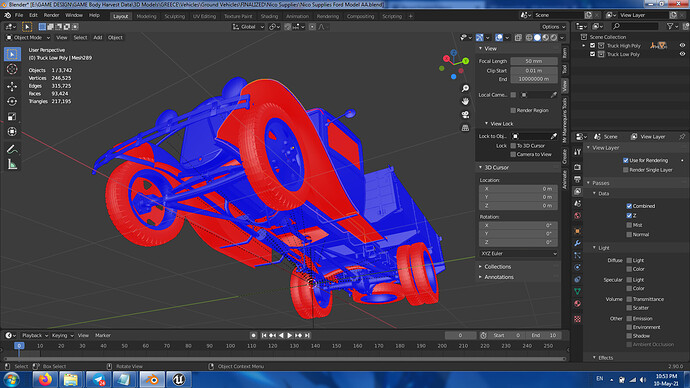 So the red portions of the image are the inside faces which would not show up in UE4 unless I use two sided materials.

My question is, would it be more performant to make all those planes 3D or can I just use two sided materials?

My question is, would it be more performant to make all those planes 3D or can I just use two sided materials?

To fix this: in blender, simply flip the normals of all the red triangles; you can do this manually or by using “recalculate outside”.

To add to what @midgunner66 said. Also merge vertices by distance, so all the floating planes will join together.

It is usually better to add faces for the other side, and not make the material double sided. The exception to this is for grass, leaves, hair cards, and stuff like that. In this case, you should add the additional faces.

ALSO NOTE: The direction of the normals on the tires and windows is incorrect and should be flipped. This is very common with Sketchup models.

Double sided materials have problems with inverted tangent spaces and other “math” bits.
Also, if there’s any transparency involved, double sided materials generally generate more artifacts, because triangle sorting has much less to work with (this depends specifically on data prep, so may not apply here.)

In general, triangle count is not a big deal in modern games and engines. That doesn’t mean you can expect to drop in your 5,000,000 character into a crowd of 200 people, but it does mean that the technical reasons to not use double-sided materials probably weigh heavier than some triangle count savings for an asset like this.

Wow it’s nice to see this post is finally getting traction! Thank you so much to everyone who explained all this. I have learned alot. As for the inverted normals, I realized I do need to make a low poly of this (atleast until UE5 comes out) so either way I need to remesh it. So rather just flip the normals and add another face while I’m at it.