I’m creating a 3rd person game(still learning the basics) and I thought about using the Character Creator 3(Character Creator - Fast Create Realistic and Stylized Characters) for creating my main characters and also for the NPCs.
I would love it to be as realistic as possible but as I am a single developer with basic 3D modeling skills yet, I am well aware that I am FAR from creating something perfect as recent AAA games out there.

Also, do you recommend anything else other than Character Creator 3 for this ?

Well any tool that supports the FBX pipeline is a good option but my main complaint with Character Creator is first cost and second CC is more of a middle wear solution that does have it’s limitations as to building franchised based characters. Overall though if you are in need of an animation tool Iclone + Character Creator is a good option if you are serious about you character animation pipeline and more so if your a team of one and have the dollars to spend on your tools. There is also, or once was, hidden costs of having to pay an export license. The more you look at it there is a base cost but to add functionality you will need to purchase other modules.

For character development working at the metal level I would highly recommend Daz Studio by Daz3d and make use of the Genesis framework which now has direct support with in Unreal 4 via the use of a plugin bridge, for that matter there is a bridge for most popular 3d applications and game engines, and for the team looking to add AAA type character model support is a logical choice from just all of the base tools being free use. Best of all the bridges are open sourced so as a replacement for the Epic base rig falls with in the fair use licensing as present with the Unreal 4 engine.

For example all of the base requirements are made available with in UE4 once you install the plugin so anything that you create on your end is, based on the Daz3D license, becomes your property as a derivative or is considered new so your free to do anything you wish with out having to pay any additional export fees or royalties for using Reallusion’s framework. That is to say that if you create DCC art you can either use the asset free from per game sold fees or even sell the asset to other developers as done in the Epic market place as a means of creating development funds as a revenue stream.

With out sounding like an add our team started using Daz Studio and Genesis since 4.0 as a development tool and with constant improvement over time has become our preferred tool for character models development that is available by everyone on our team with out the additional seat license.

Is it for you?

Well since it is free, with out limitations, it does not cost you anything to test drive.

Hi @FrankieV , thanks for the detailed reply!

I have a personal 10.000 euros budget for this game, that includes software license, so paying for it is not a problem but of course I don’t want to spend all my budget only in CC3 + IClone .
About the cost for an exporting license, that turns out to be a nightmare to understand, check this thread: https://www.reddit.com/r/gamedev/comments/gtf4w4/does_anyone_else_find_reallusions_character/

Apparently if I want to create characters to sell in the UE Marketplace for example, that needs an extra license, but that is not my case, I’ll only create characters for my own game.
I guess the right bundle for me would be this one:

Based on the “Edition comparison” I can fully export FBX: 3D Character Maker and Creator | iClone

As you said, I am indeed a one-man team and have a few bucks to spend on tools, so I want the tool that can make my life easier and my job faster

I downloaded CC3 and Daz Studio trials… at least at first glance, CC3 seem much easier and faster, do you agree with this ?

Well our team has been using Genesis 3 since day one so well versed in what it can or can’t do but the plus side of things you could just as well make use of G3/G8 in iClone with out the additional licensing fees so having the best of both worlds is a good option as well. A consideration is if you are in need of an animation tool then for character animation iClone is a solid choice, we use MotionBuilder, and use G3/8 for your framework. Trying to author animation in Blender/3ds Max/Maya is like trying to write a book using a spreadsheet.

Although Daz Studio is free, I noticed that to make it easy to use a few plugins would be necessary like the Head/Face Morph(200 Plus Head and Face Morphs for Genesis 8 Female(s) | Daz 3D). Which commercial plugins do you think is a must for creation with Daz ?

For the animation I guess I will go with the IClone indeed, now it is just a matter to decide if I should go with CC3 or Daz for the character.
As I said, I have no experience with this so I would like the easiest tool, as you are already very knowledgeable with Daz, do you think you would be as fast with CC3 or not really ?
I did a quote with all the addons I think I need for CC3: 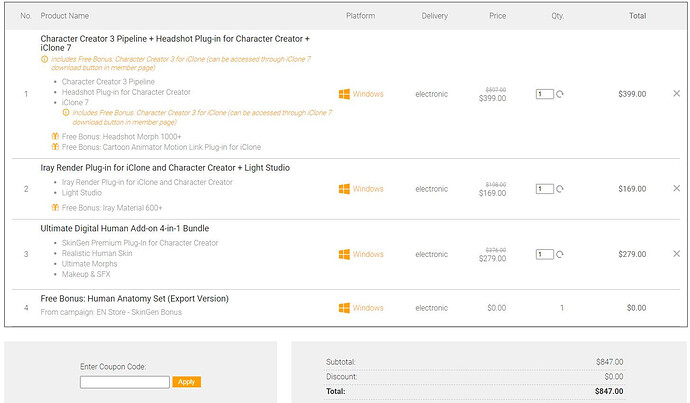 As you can see I have to pay for things that Daz have for free, like the Iray plugin.

It’s most likely that I will end up buying a lot of assets(hair, skin, clothes) and modifying them instead of creating from scratch, do you see any advantage in Daz over CC3 or kind of the same price and availability ?

Thanks mate, you are really helping a lot!

If you’re rendering in UE4 you don’t need IRay

Well keep in mind that Genesis is a framework base that other type of character models can be created from using what they call injector technology. It’s more or less the same thing Weta uses to create an army based on a single framework solution. You then buy what you want just like you would from the Epic marketplace.
This for example
https://www.daz3d.com/werwulf-for-genesis-8-male-s
Is an injector for the Genesis 8 male so if you purchase head shapes, like phenoms, they will translate over to this injector as a unique character.

As part of the kit the bridge already comes with the must have resources that is installed into Unreal 4. What you get is the base Genesis framework assets, open sourced I might add, as well as pose files necessary to re-target to the Unreal 4 Epic rig and animation BP. Added as well is the base materials the support instancing so you land up with a correct application of the materials. You also get the base animation BP set up for use with JCM, joint controlled morphs, which corrects for joint deformations the skinning solution can’t handle.

To add to the fun Genesis options are added to the Project Settings that will allow you to target you import to your own custom made Genesis rig, as in keeping all of your sockets, and custom requirements, as well point to your own material base so if you make an awesome skin material with all the sub surface goodies it’s there.

So yeah there is a lot of advantage of G3 over CC3 as a “framework” base as the base is in place with out having to worry about additional export fees just because you want to export to a different platform. You have the open source license, tight integration with UE4, as well the ability to sell parts of your effort as a revenue stream to support you own development efforts.

That said the Daz to Unreal bridge is the first iteration of things to come as they yet but plan on support for Dforce, a cloth sim, as well as conversion of IRay materials to UE4 PBR and since we have been using Genesis from the beginning as a development tool since UE4.0 I would be hard pressed to recommend anything else as we needed a replacement for the Epic rig and noting comes close, I looked, as a “framework” option.

Daz Studio + Genesis = on serious kit before we even talk about other requirements like first person hands and 2D renderings.

As a perspective CC3 is like a Mac where the provider helps you along the way. Genesis is like Linux where the more you learn the more powerful it becomes.

As a perspective CC3 is like a Mac where the provider helps you along the way. Genesis is like Linux where the more you learn the more powerful it becomes.

You had me there!

As a Java developer and Linux user for the past 20 years, Genesis sounds more like it.
I’ll try to do what I want with Genesis, probably gonna struggle a bit at the beginning but sounds like it will be worth it.

I’m in the same boat as you and was just wondering if you ended up going with that cc3 bundle? Any hidden costs for your pipeline? I am thinking of buying but need your feedback. Much appreciated!