I’m working on iOS projects in 4.12.5 and 4.13.0 Preview 3. Every post and answer that I’m finding for iOS resolution is saying that the blurriness is fixed by using the r.mobilecontentscalefactor through .ini file for device profiling. I have copied the file from Epic example projects and made sure all the new iOS devices were within as well. It did help the blurriness, but the image is still not really high quality. I have also developed the same project for Android and the comparison between the two is crazy. The android project is clear and vibrant, while the iOS project is somewhat blurry and doesn’t appear as colorful, vibrant. Are there other inputs to the .ini file that would help this? Or can someone point me to other settings to make sure its not something else? The test image is a 4k image.

A side note, I am using the GoogleVR plugin for cardboard, could this have an effect?

I was just thinking, if anyone had a resource or create a cheatsheet for all of the variables that can be added to Device Profile ini files, that could be awesome. Also, showing the min and max numbers that can be used for each device and whats best quality for each… That would be such a helpful resource and I haven’t seen much on the topic.

Sounds like you want to use r.MobileContentScaleFactor. The one you mention isn’t a listed console variable.

If you’re not aware there is also the Device Profiles window in UE4 that is helpful for setting up your profiles. You can use this by going to Window > Developer Tools > Device Profiles. You can use the wrenches next to the device you are targeting (or create a new custom profile) and you’ll be able to enabled/disable the various console variables that are available. So for instance, if you choose iOS and then use the drop-down seletion for the available variable it will be contained to only the applicable ones for that device so you don’t have to question whether something is supported or not.

I edited the question. I was using r.MobileContentScaleFactor and I have checked in the editor Device Profiles to make sure the Default Device Profile .ini was confirmed. However, I am still getting a much clearer picture on my android (note 4) than on my iPhone 6s. I guess I’m wondering if there is anything else that could cause this or what I am doing wrong or missing?

I have tried both of these r. values. I am still getting a much crisper and better colored picture on the Android devices than on iOS, and I am only testing on an iphone 6s. Can you tell me what other r. values may help to increase this resolution, color, and look? Also, what the max settings are for each iPhone device from 5 to 7?

I have attached a couple of screenshots for you to see what I have. I started with the Tappy Chicken device profile file and then edit it. 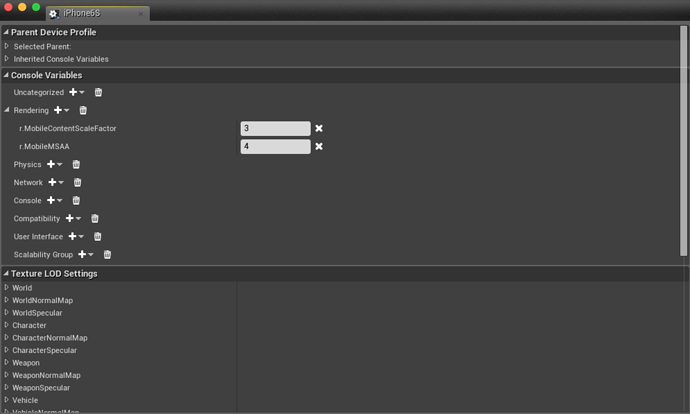 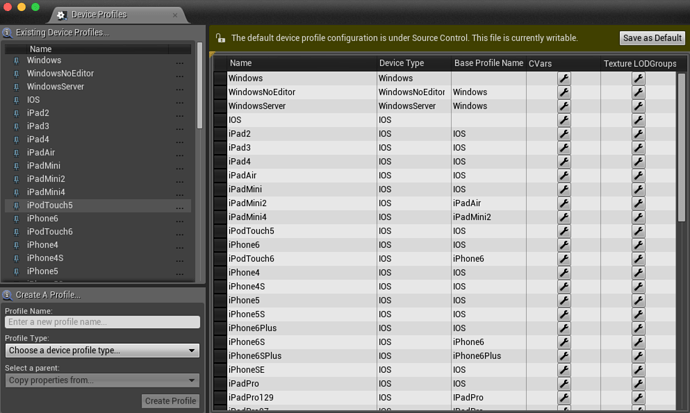 I don’t have any specifics really since I’ve not done extensive setups for different device comparisons.

Can you post a screenshot from each of the same scene and location to show the difference. Also, include what Android Device you’re using testing with and OS version for comparison of the Iphone 6s .

I’m not sure I would expect a huge difference, but understandably these are different systems so there may be something I’m not initially aware of. I can take a look and see if there is anything though that stands out. Also, let me know if you’re using default settings for comparison or if anything has been set differently between the two aside from the MSAA and Content Scale settings we’ve discussed.

Thanks a lot. I have attached the Android screenshot and the iOS screenshot: 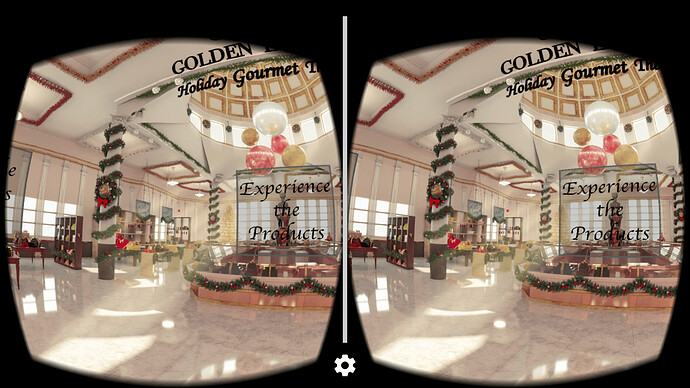 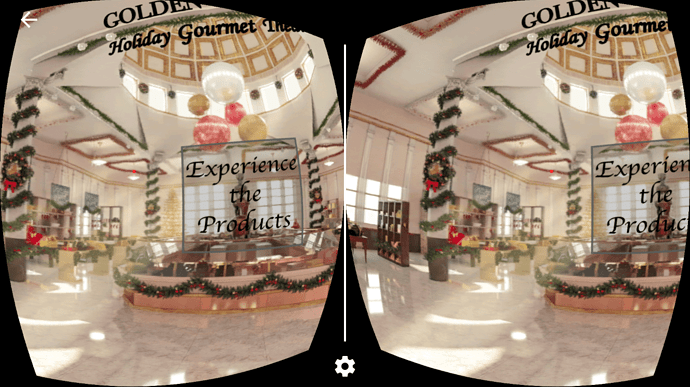 It is mostly the background image that you can see is much crisper in the android, which is very evident in VR because the blurriness hurts the depth feeling.
As for the settings, I started with the Tappy Chicken DefaultDeviceProfiles.ini. Then the only things I edit were the two you mentioned to the values we mentioned. (MSAA-4 and Content Scale-3)
I hope this is enough info. I can provide any other info as well, just let me know.

Can you or anybody else shed more light on this issue?

I am definitely using a high enough resolution for the images and have device profiling setup correctly according to all the sites and online info. Any help would be huge.

Any help on this would be greatly appreciated. I have both the android and ios app out for distribution in both stores under golden edibles. However, the android version is still much crisper and vibrant in VR cardboard. If you could download and test and give any input, it would be GREATLY appreciated.

Anyone have ideas here? Pretty desperate at this point…

@Bamwd5
I was wondering if u have found any advancements

@RBow7 unfortunately not. After changing recommended settings and adding device profiles per devices, I am still seeing a much clearer picture in Android than iPhone. I have not tested this in newer versions however. You can download the app on both platforms stores, it’s called Golden Edibles Holiday Theater. Thanks

Would you be able to post your settings you used in the device manager and rendering tabs for the iPad?

This is a bit old, but maybe someone still finds this useful:

If you would like to use the actual full retina display resolution, use a scale of 2 or 3 - depending on the device model.
A very useful list to find the correct scale factor for iOS devices can be found here: https://iosref.com/res/

Tip: of course a higher r.MobileContentScaleFactor comes with performance cost. But if you need it to be higher, there is an easy way to independently scale down the rendering.
Besides setting the r.MobileContentScaleFactor, you can experiment with the camera settings in your player pawn camera. Setting it’s resolution lower (in percent) will only affect rendering and regains performance.