Hey guys, I’m fairly new to the unreal family but I’m loving it so far. A little bit about me: I’m 30 years old and from Norway, I’ve been a musician all my life and worked 5 years in neuroscience(dEEG/eyetracker stimulus and analysis). I have recently applied to go back to university yet again, this time to study physics. I have done some game development before as I started learning C++ as a direct consequence of Valve releasing their Half-Life SDK. I helped out on some projects such as Quake 3 Fortress and Warsow. As you can probably abstract from this is that I’m a guy with many different fields of interest and thus the unreal engine kit has been a perfect fit for me. One of my hobbies is RC helicopter/quadcopter flying and I wanted to make a simple flying game with the same input control(throttle, collective, pitch, yaw and roll) I’m used to in RC flight.

So to get my hands dirty with UE4 I decided to:

After going through various content examples and looking at how things were done in the Solus project, this is what I have so far after the first week of development. I decided to use the provided plane mesh since I haven’t had time to make a helicopter model yet. The flight mechanics of this aircraft is more like a jet/ufo than a helicopter as it is driven by propulsion as opposed to lift 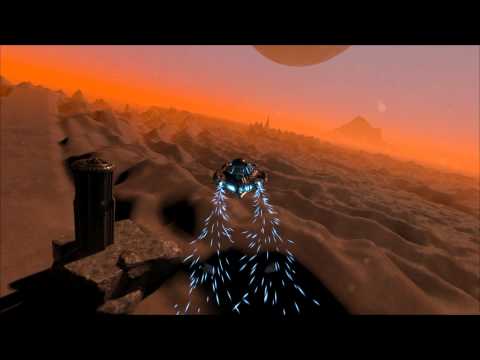 PS.
The new blueprint system is very handy and easy to use as I’ve been using familiar modular IDE’s such as Reaktor before.

Great work so far! Can’t wait to see what future projects you are able to create!

Nice! Looks like you are using the Spring Arm Component, you’ll be pleased to know there are some nice new features (like ‘rotation lag’) and bug fixes (less jitter) in 4.2.

Yes, I am. That sounds cool, can’t wait for the update. Also, I noticed that my camera sometimes clips through playermeshes which is a bit strange? I think I have my collisions set up right, but things might be bugging as my playerclass is based on a pawn.

This looks good. It’s funny your history is kinda like me, I’m in the medical field and make music too. And now gaming. How is the RC helicopter model coming along?

Nice! Looks like you are using the Spring Arm Component, you’ll be pleased to know there are some nice new features (like ‘rotation lag’) and bug fixes (less jitter) in 4.2.

I for one am REALLY happy to hear this! I’ve hacked in some fixes on my own, but it would be nice to reduce the complexity anywhere I can

I’m excited to play with 4.2. If only I had more time and brains to get things up and running wiht the compiled version.

Sounds similar the non-profit project we working on:

Strafe Attack will be a Co-op battlefield styled helicopter game, the way this game will work is 1 person will pilot and the other one will shoot. It is currently being developed by a team of 4 people and development is going quite well. Team...

This looks good. It’s funny your history is kinda like me, I’m in the medical field and make music too. And now gaming. How is the RC helicopter model coming along?

The flight model is working fine so far. I have been looking at different fields of the engine lately and I’ve been doing some basic work in blender and implementing it in-game for sake of testing and learning.