Objects that my player can or can’t interact with are on a different interface. It would be useful if I could use a variable for “Does Implement Interface” because I have more than one interface for different types of objects and their child classes.

Why do you need an interface variable in this case? When you use the Does implement Interface node you can select the interface you need from the drop-down list, as for me it’s faster and cleaner than getting the the interface variable and connecting that to interface pin. And even if you have this kind of a variable, it won’t help you “tell” your object to activate it, you still have to do it manually.

Not seeing what the issue is here…I created an Interface “Variable” and it seems to work just fine like any other variable. 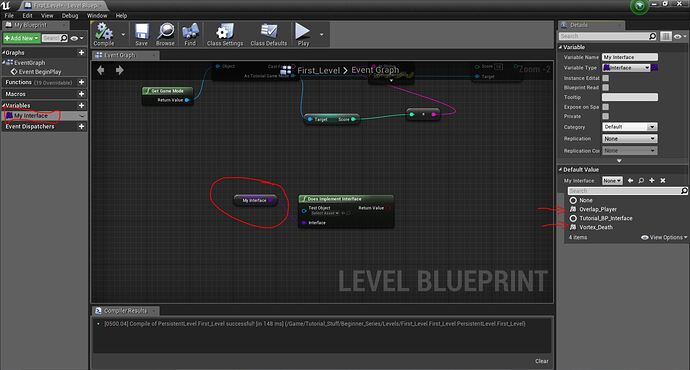 I believe what @CognitiveDesign meant is that you cannot create a variable of this type by clicking +Variable, and that is true indeed. You can only create it by dragging it from the Does Implement Interface node.

Ahh, I see what you mean. Hmm that is very odd, probably an oversight. I know this was an issue with quaternion variables, some engine versions had them exposed to BP some didn’t and sometimes nodes would use the quaternion class and then not be able to create a variable out of it. Weird nonetheless.

It’s as Tuerer said. I’m wondering why I can’t simply create the variable. I’m not sure if it’s an oversight or if it’s hidden because you’re not supposed to use it, I’d rather not use something in a way it wasn’t intended and risk breaking my class. Seems strange you’d need to create a node and then drag off of it to create a variable.

I have a few different interfaces that just use an Activate call. When I’m putting together a level I’m often changing what I want to interact with and it would be easier if I could just assign the interface in the editor instance. Since they all use the same Activate call, it’s simple enough to have a controller the player interacts with which I can change per instance of it, what it should be activating. I’ve done it with the variable, it works fine calling the different interfaces just from changing the variable on the instance and no changes in blueprint code.