We are getting black flickering artefacts on surfaces (especially those close to the camera edges) in the viewport and PIE. We are also unable to set transparency on the object selection highlight. Finally, the game icons/ billboards (player start etc) show as chequered as if selected.

This is in new blank projects and new FPS templates both with no adjustments (haven’t tested any other templates).

Reading around the forums some of these are known issues (e.g. the highlight issue) and there are several places where people advise against Intel Iris Pro cards.

Can anyone explain what the issue is with the Intel Iris Pro cards? The recommended specs just say Open GL 4.1 cards and the Apple support page says that this card is Open GL 4.1: Mac computers that use OpenCL and OpenGL graphics – Apple Support (AU)

Is there an older version of UE4 that would be more stable with this card? Going back to 4.14 seems to fix the black flicker but not the highlight issue (Note: I haven’t tested anything complex yet just the new projects and some simple materials).

It would help to see a screenshot. But just a note, that’s not a good GPU so performance is going to be an issue there.

Here is a screen shot.

Just to give a bit of context here so that it is clear why “use a PC or a different graphics card” doesn’t work for my situation.

I’m teaching a class of 180 students at a university in their labs. I have no control over the hardware. We have taught with Unreal for the last two years in our Apple Mac labs.

I’m just trying to understand what the issue is with that card and which version of Unreal will be the most stable for our situation.

It seems like a GPU bug, that’s not something you would normally see from any settings so that would require one of the engine developers to take a look at it. It might work properly if you install Windows in Bootcamp. Ultimately though, Macs aren’t good for game development, you might not be able to do anything about it right now but keep that in mind in the future.

I got an answer on AnswerHub that it was an Apple Issue and that they have been notified. We have gone back to 4.14.3 which does not have Black Flicker problem. We can live with highlight transparency issue. 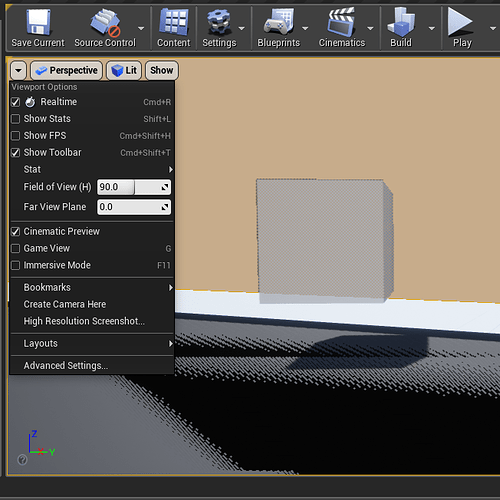 We are about to (tomorrow) start a class using UE4.15 installed in a lab setup with no launcher. The computers are iMacs with Intel Iris Pro 6200 cards, 8GB RAM, OS 10.12. We are getting bad black flickering artefacts on a new FPS project with...