Working with Unreal Engine 4.8.3, we wanted to try out the integrated Source Control when we bumped into an unexpected problem.

We have two ways of accessing the same repository: either via

There are some minor differences in permissions and perforrmance, but the two can be used pretty much interchangably, i.e. while most of us the svn variant, the few colleagues who need to access the repository via https can commit their changes to the same repository without any problems.

For our Unreal project, we created a new repository, which we checked out using the svn path. Using TortoiseSVN, version control behaved as expected. However, we had problems logging in to the integrated Source Control.

Entering the svn path in the Source Control Login’s Repository field always failed with “Unable to connect to a repository at URL” and “Authentication error from server” even with the correct user name and password.

We then tried entering the https alias instead, which also failed. Surprisingly, the error message is exactly the same, i.e. it looks like the Source Control is still trying to access the svn repository path. 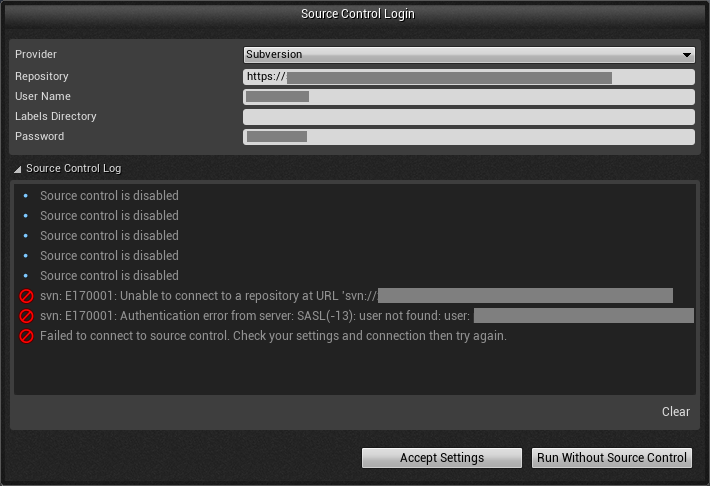 At first we figured that the engine might have cached the previous Repository entry, but when we asked a colleague who hadn’t used the Source Control before to try this, the result was the same. This led me to believe that the engine was pulling the repository path from the project’s svn checkout path. To test this, I did another check out from the https address and then tried the Source Control login again, which immediately worked.

We found a workaround, so this is by no means urgent, but it’s at the very least confusing.

I’m glad that you were able to find a workaround for this issue. I have entered a report (UE-20261) to investigate this issue further.

Hi Doug, is there been any updates on this? We wanted to move from https to svn protocol, but as the OP mentioned, this flat out doesn’t work on UE4. We tried UE4.10.2.

As we host our own SVN server, the benefits of using the svn protocol instead of https is massive. We avoid incurring a re-auth and pipeline teardown for every file when we use the vanilla svn protocol. This will be a massive boost to our editor responsiveness if the svn protocol is supported.

The reported issue is still open for investigation. I have updated the report since this is still affecting people, however I can’t say for sure when a fix for this will be implemented.