So I gave the UE5 early access install a shot.
First try was installing the Epic Games Launcher. This is apparently Windows only, and tried to run under Wine 6.0. Result: 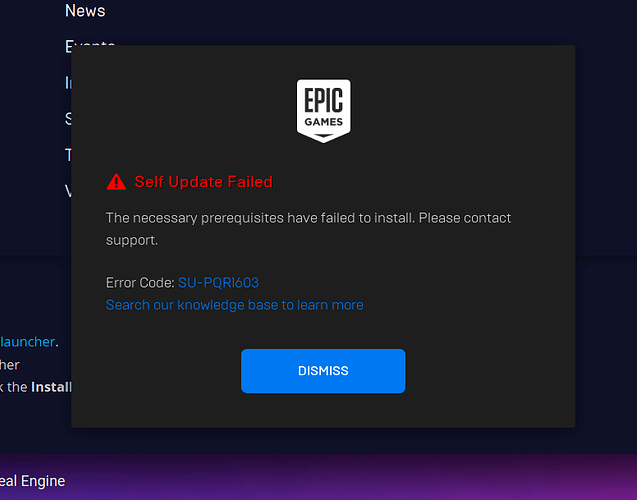 This is probably due to some missing DLLs, and with enough searching for DLLs for Wine, can probably be bashed into running. “Error code SU-PQR1603” is a bit vague. Says contact support, and so, you’ve been contacted.

After that, “make” ran fine.

Found the executable, “UnrealEditor”, and launched that.

Using about 12GB of 32 GB at that point, not swapping.

That worked, and I was able to create the sample “third person” project.

But the sample project did get created and will Play.

So, looks like the Linux target for UE5 is basically working, but needs some cleanup and polishing.

I was able to build it on my ubuntu 20.10 latest without problems, building procedure is exactly the same like with ue 4:

Learn how to download, build, and run UE4 on Linux.

In short, you’ll need to:

Hi, I came across your post. I tried to install UE5 as well (and UE4 before that) on Ubuntu 20.04, following exactly the same link you mentioned. There’s no error or anything, building & compiling were succeed, but it took me almost an half hour everytime to open UE. My machine is Core i7 with 20 ram, so I doubt there’s should be an issue with it, even Unity runs smoothly in my machine. I read that many people have the same issue and I read there’s a workaround to open a project instead of opening UE directly, it works but simply not practical for me.

Do you have the same issue , any advice ? And how do you open UE, from terminal, like the tutorial, or launcher ?

Hi, I’m on Fedora 34 and while UE5 starts much much slower comparing to Windows it’s definitely not a half of an hour it’s something like 4:00-4:30

I recently just deleted everything (UE4) and build again from scratch for UE5. So, UE5 opens around 14 minutes (had my stopwatch recording), and every time I tried to create a new project it would crash, I tried this a few times now. I mentioned this in Unreal Engine discord channel and apparently it’s not just me encountered this problem.

It might be because I’m using the latest commit (less stable?) But is it the distribution as well ? I’m on Ubuntu (Debian-based), it might be not the same case for Fedora then ?

FIRST launch after fresh build may take a longer time than next ones because UE5 will spent a lot of time compiling shaders. Next launches are faster.
I’m constantly testing UE5-main branch latest commits and while UE5-main have bugs crashes are pretty rare.

I just tested with build made yesterday and after click on create project to opened and working editor window - 4:00.

It is sounds stupid but on mine Fedora system Windows version of UE launched using Wine starts in a less than a half of a minute. As I guess it’s because Linux UE binary is dynamically linked.

I got mentioned 4 minutes startup on a very old system config:

I understand that FIRST launch would take more times, therefore I mentioned I have tried a few times. As of now I really have tried many times to open it, there seems to be no different on my machine. Yes, I build yesterday’s commit as well, and apparently on Linux it crashed not just for me. (Confirmed in UE Discord channel - Unslackers).

Hm, you have mobile chip. Did you checked whether it overheats on UE startup or not?
Also check in startup log that GTX 950 used not Intel GPU

Mobile chip, do you mean processor for mobile devices ? No, I don’t. I’m working on Asus laptop. Actually, I saved a log when my program crashed, I did see that UE recognizes my Nvidia. I can upload imy log if necessary but it’s not my thread, should I make a new thread ?

I mean not a desktop processor. And Intel’s specs for your processor says it’s a mobile one - i7 7700hq
Yes, having a log is nice idea.

I can’t open your link, but if what you mean was mobile cpu, then yes it is. Here’s my log. Quite long and I don’t know where to start looking. Please let me know if you find any useful info, thanks.

Without knowledge of what exactly you are tried to do - to open existing C++ or Blueprint project, to create a new one etc - I can only say that UE really tries to use GFX 950

Actually, I mentioned in my prev post that you replied that it crashed every time I tried to create a new project. Also it’s creating a new project using C++. Anyway, thank you.

sorry you seem to have trouble. sadly cannot assist. My unreal engine versions on ubuntu opened up as fast as on windows

I agree, the very first time it can actually take half an hour to an hour for shader compilation etc, that seems to be a fix part in loading up the engine now. But if you did that once, the next startup should be within minutes if not seconds. I have the feeling on windows at least, the engine is much faster in starting up, even saving materials and some other stuff than previous UE versions.

yet i have to say I switched back to windows, because i do wanna play with UE5. This for as long as nanite is not supported on linux (vulkan isn’t working yet for nanite)

it will be but it’s not yet.
Nanite can only be used on Windows for now. Probably will have to wait until early 2022 when UE5 will be released. So I suggest installing a windows until UE5 proper version is released so you can actually test nanite. I hate to give that advice, but it’s really the best thing to do if you wanna play with UE5 without many additional headaches and nanite not working.

At the moment I just set up my scene as I want it in UE5 but gameplay wise I still use UE4 to test my character controllers, ai, other functionality. I mean even creating a landscape from heightmap fails in UE5 (if you can even call that failing :'D). It’s only good for testing nanite and lumen (and hell I’m impressed!), but you can really not yet do much more than filling a landscape (that you setup in an earlier UE version and converted it to UE5 project) with assets and see how it looks (beautifully

).
I mean of course the UE4 functionality is there with blueprints and all the systems, but some things aren’t working, other things might change. So maybe just continue using UE4. Just give a ■■■■ about LODs and converting assets into low poly, because nanite really can handle it

Hi, thanks a lot ! In my case UE4 opened really slow even after the first launch, that’s why I am confused. From my terminal log, it seemed like it needed to compile shaders everytime.

You’re right, since UE5 won’t even open on my machine properly maybe I should just go to back to UE4, it’s not ideal and extremely slow, but at the same time I only have one machine and I can’t go back to Windows due to many other projects that need Linux.

I wish you good luck!! Hope UE5 next year will run faster for you, it can really drag one down if you have to wait for software all the time while creating games etc. I’m surely gonna be back on linux as soon as nanite works on linux (can’t stand windows anymore^^), then I might be of further assistance again as I could test stuff locally

Have a good time!