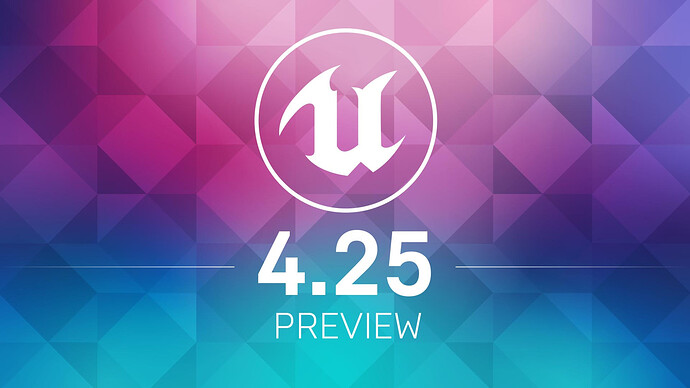 WHAT
With Unreal Engine 4.25 just around the corner, we’ve invited a few of Epic’s engineering directors to share an overview of the new features and updates arriving in the full release. Tune in to hear about everything from major updates to Niagara and general animation improvements to experimental Insights, native LiDAR Point Cloud support, and more!

Do you guys think you can maybe drop some information about the Epic Online Services? Any special plans?

render preview problem in 4.24 any idea we check 4.24 and 4.25 but both same problem movie render preview not show video but output video is fine any idea preview window size change???

Tune in to hear about everything from major updates to Niagara and general animation improvements to experimental Insights, native LiDAR Point Cloud support, and more! 4.25 Preview Forum Thread

Update is cool thing yes. But can we finally get adequate documentary about C++ in UE4. For now that part of docs is in very sorrowful state. Some times it is even easier to read source code then looking at docs.

Would there be a fix to settle the DPI Setting when linking ArchiCad with TwinMotion for 2000x3000 screen resolution on a Surface Book 2?

What System and Hardware does UE4.25 Requirements ?

Count down is wrong by the way. Its set to April 23rd, not April 30th.

I accidentally deleted my 4.25 Preview Version. How do I get it back?

Who thinks that UE 4.25 is going to change Fortnite?

Count down is wrong by the way

is it finished? or not star yet?

Would love to hear about the state of chaos.

Excited to see the work being put into the mesh editing tools. I do wish there was more documentation about Epic’s goals with the tools, what they’ve implemented and what they want to do with it. Currently its mostly a matter of blindly testing each release to see how the tools improve since there is usually no place to track progress.