Inside Unreal: Texturing with Quixel Mixer 2021 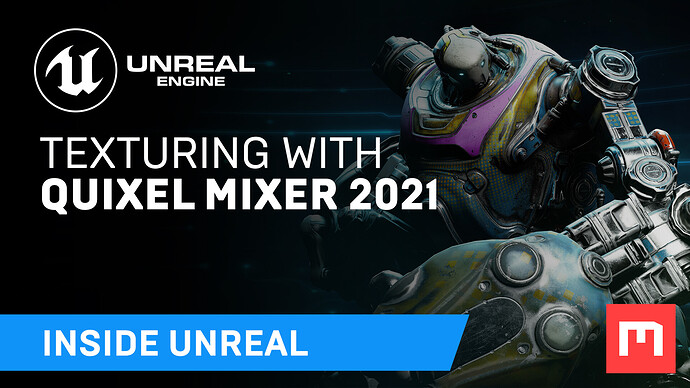 210506_TexturingWithQuixelMixer2021_Thumb1920×1080 409 KB
WHAT
Mixer 2021 is a massive update to the free texturing tool by Quixel, and this week on Inside Unreal we’re going to cover Mixer fundamentals as well as the new functionality introduced in Mixer 2021. Join us as we create surfaces and smart materials, work with Multiple Texture Sets, and show you how to export to Unreal Engine via Quixel Bridge.

YES!!! Thank you all involved! Can’t wait for this one! See you all there!

Great. I’m brand new and trying to learn. look forward to this. Thank you.

Just a note to everyone; remember, if you missed the live stream, you can watch it back on Youtube, with added timestamps!

A bit sad… They’ve made all these significant improvements like multiple texture sets, yet they still can not get something as basic as viewport navigation right

And it’s not like they’re not aware of it. I’ve mentioned it on Quixel forum several time, but the response always was the typical polite corporate version of “■■■■ off”

The following links have been added to the resources in the original post!

For anyone else coming here for a link to Juan Paolo’s ArtStation; here it is: Quadmech ∎ Juan Paulo Mardónez (artstation.com)

can anyone send me a new Quixel discord invitation again, the posted one already failed.