Inside Unreal: From Ants to Outer Space - May 28 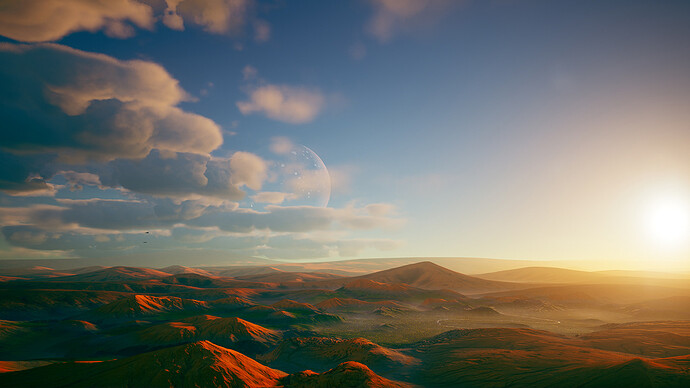 WHAT
We’re excited to have our Lead Evangelist Sjoerd de Jong on Inside Unreal this week! Following the presentation of our new Sky and Atmosphere features, Sjoerd will take a deeper dive into precisely how all of it was built. We’ll take a look at the massive scale of the planet, the Blueprints and material setups used, how the moons were made, the spherical world, foliage tricks and how the landscape was crafted. Prepare by watching the presentation, and feel free to ask your questions here or live on Twitch. Its amazing where unreal is going…

Its amazing where unreal is going…

Well, its amazing where Epic COULD go…

presentation of our new Sky and Atmosphere features

What’s so great about the Lumen / Nanite / Megascans realism…
if Unreal can’t do planets. Look closely at the picture and repeat…

**EPIC: "We will add Planets to Unreal Engine.

Legends. All of you.

Brilliant! cant wait for the live stream. Thanks to the team, you guys rock!

when are you planning on doing a control rig demonstration have figured out things messing around but it would be nice to watch someones workflow from an ik rig to making animations and the way that would work with a code driven system. p.s excited to see what the atmosphere update has added as volumetric clouds etc were quite demanding with everything else in a game running

there is a free schjool material for unreal 4.23

@Hourences](https://twitter.com/Hourences) Could you go over a basic demonstration on how to make a day night cycle with the new atmosphere system ?

got lot of good ideas out of it. on the Moon material, what do you do at the bottom of the node tree? (below the eclipse stuff) you didn’t show that part. and cant make out from the big view whats going on there.

Amazing, Thanks for Sharing.

I really enjoyed the stream. Amazing work!
One question though I have since the previous stream, about the cloud layer translucent material that uses the sky atmosphere node. Where can I get more information about how to set it up in more detail?

So it this just a giant backdrop? Or can players actually explore this world?

So it this just a giant backdrop? Or can players actually explore this world?

If you watch the Livestream its covered towards the end during questions.
Hourences is a genius. But this is just a slick tech demo. Its not a game!
If you want to see this in UE4 anytime soon, get behind the projects here.

for testing, can you please provide in future all your demo project files for download?
Including this one?
thanks

for testing, can you please provide in future all your demo project files for download?
Including this one?

There are problems with that. Hourences explains why in the Livestream.
To sum up there are Marketplace assets used! So that’s a deal breaker!
4.26 may offer a stripped down version (but mostly just SkyAtmosphere).