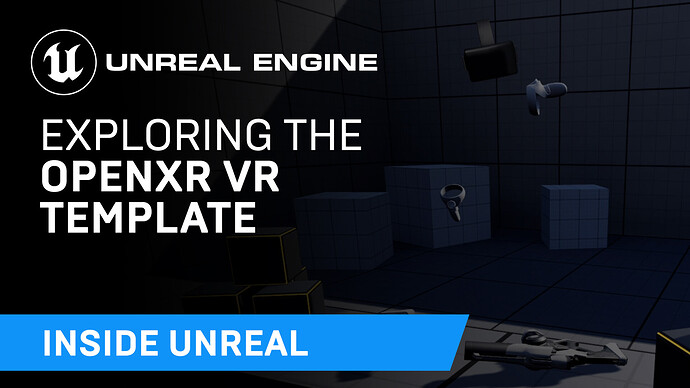 WHAT
With Unreal Engine 4.27 OpenXR is now production-ready, and there’s a new VR Template designed for it! This week on Inside Unreal, we’ll explore the Blueprint framework that makes up the functionality of the template and how you can customize it for your own experiences.

Heya, just one thing about the template I noticed. You can no longer set your facing rotation when telporting.

Seems like a tiny bit of a downgrade from the previous VR Template where you could set your rotation and location with the thumbstick while teleporting.

This news has come at an incredible time, thank you so much Unreal

Great to see you boys again on the stream! Excellent layout of the new template, as you said more of a demo and less of a classroom.

great stream guys! can you recommend the simplest way to add smooth locomotion to the VR Pawn ?

I just want to make sure that I can’t set up rigged hands or hand tracking when using openXr yet. The only visual component for hands for your character pawn is the motion controller?

Is anyone else having this issue?
**UPDATE, eu5 is defaulting to DirectX12 in RHI target, set to 11 for the VR example.

after i change into DX11, finally my UE5 does not crash anymore