Ingame visual programming - how to realize?

i am not sure, if this is the correct section, or if this would belong into UI or blueprint scripting. Well, i just want to ask, if anybody here knows a tutorial or a link to an helpful site for creating a kind of ingame script language or ingame visual scripting here in Unreal Engine (blueprints only, if possible), just like blueprints, but accessible from the game itself and changeable during runtime.

To show you, what i mean, there are some games, that are built around the idea of programming your bots or figures during the game, so that they act on their own and complete the tasks by themselfes (most of the time). Basically, you create their AI during the game, with parts and code, that you create during that game.

One of those games is “Main assembly” currently in development, and they use UE4 for it, here is a look at their solution:

There you can see all the functions and parts, that the user can use to create the programming for his machines, and how he can connect them by just dragging and dropping them on the grid and connect the pins, just like our blueprints here.

Other examples would be systems like this are older games like Carnage Heart and its sequels (there it lacks the ability to connect nodes whereever you want, so its more puzzeling): 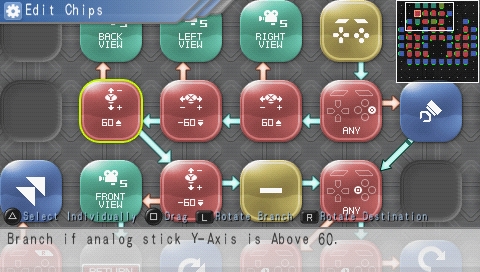 Carnage Heart (カルネージハート, Karunēji Hāto) is a video game for the PlayStation, developed by Artdink. Its gameplay is a mecha-based, turn-based strategy game, where the player takes the role of a commander in a war fought by robots. The robots, called Overkill Engines (OKEs), cannot be directly controlled in battle; they must be programmed beforehand to behave in a certain way under certain conditions using a flow diagram system. The game features a fairly complex negotiation system that allows the...

or with an old BASIC style programming language, the ancient DOS-game “Omega”:

Omega is a computer game developed and published by Origin Systems in 1989. It was directed by Stuart B. Marks. The game puts the player in the role of a cyber-tank designer and programmer. Given a limited budget, the player must design a tank that can defeat a series of ever more challenging opponent tanks. Each successful design yields a higher security clearance and a larger budget, ultimately resulting in an OMEGA clearance and an unlimited budget. The focus of the game is not on the combat ...

So for something like that you have to build your own “language” and bind that language to functions you have in your game to perform actions based on that language (an API).

So for something like that you have to build your own “language” and bind that language to functions you have in your game to perform actions based on that language (an API).

Yeah, that´s what i thought about, or that seemed to be the way, all those games used, they created their own (script) language. In some cases this language is represented as a kind of basic dialect, in others just as icons, but they all do similar actions.
But i can´t find much material about this topic for unreal engine (or in general), or i am using the wrong terms for google ^.^

I am writing my own for similar reason…
But I am creating an “expression parser”, not a general purpose scripting language; they are very similar tho, I am reading this series while experimenting with my own lexer/parser/interpreter:

Thanks, i will take a look at that

This is very interesting stuff!
I began making a “Lexer” that is purely written based on “Unreal Types”, no STD dependencies neither RTTI usage (also not using any types from Unreal Editor)…
I input some “script” and the lexer class returns to me an array of UStruct containing all the “data” I need to inject into a “Parser” then later translate those structs from the array into a in-game visual scripting system

Then the resulting array of structs return to me these results:

I think I should add more work to interpretation of “function bodies”, but for now I’m glad it’s not a total disaster.

That looks like C++, the exact thing, i hoped to avoid :eek: (and why i hoped for a pure blueprint way ^.^ ). Well, i found some older stuff about lexer and parser on the net, so i guess, i start reading this.