I’m pretty sure this isn’t that hard to figure out, but I think I overlooked something.
How can this be an infinite loop?
I made a BP for my enemies to be the base,and I create the enemies off of that BP so I just change some variables to make them different.
This is the graph of the base BP. If the Apply radial damage is connected, it gives an infinite loop. If it is not, it’s working just fine.
I want my enemy to explode and give the player damage. 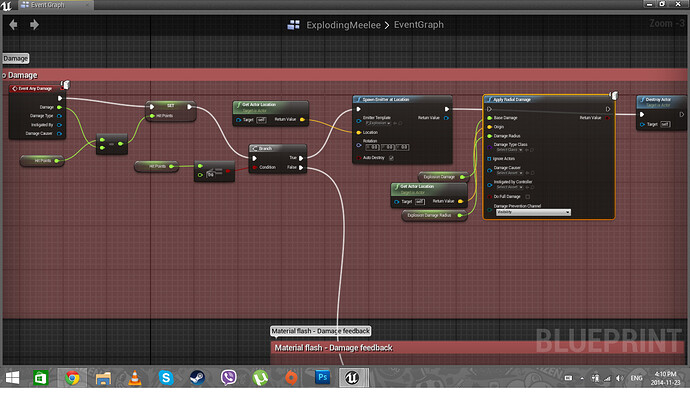 Not familiar with the default damage handling system, but it doesn’t seem unlikely that “Apply Radial Damage” actually causes an event of type “Any Damage” to be sent out, thus causing the loop.

That would make sense. But I’m kinda new to the engine. Is there any way I can fix this? If not, is there a way to simulate radial damage somehow?

Xnome and Pierdek are correct. The loop you are running into is caused by the radial damage node, which is dealing damage to your player character. in the ignore actors input pin, drag off and create an array containing “self” or specifically the pawn for the player character. This should stop the loop from occurring.

Yes it stopped the infinite loop, and I just switched the “Damage prevention channel” to Pawn, and now my actor properly gives damage to the Pawn when destroyed. Thank you!