In need of Stealth Kill/takedown Tutorial.

Heyho guys! Does anybody know any kind of tutorial that shows how to create a take down system/Mechanics? like If I press f for example an animation for 2 players starts and one of them ,lets say, stabs the other and the stabbed player dies. Does anybody know any tutorial for that? here an example: - YouTube please really need some help

If you take a look in his comments section…

Hey There, That is actually my video!! I keep seeing lots and lots of interest on this, and looks like there is no one that has really any video on it. Give me a week, I am recreating this project with some improvements and a later version in unreal and I will make up a quick video on youtube on how to program the takedown. from the smooth transaction to get behind the enemy, to how to get both animations playing! To let you know I was just did the programming of this project. If your looking for how to actually animate both animations that was done by our animator. As far as I know he took both skeletal meshes together in Maya or 3ds max (can’t rememebr each one). and animated both of them at the same time , and then exported them separately. Therefore, as along as I got them to play at the same time and in the same position, it would work!

Again, since i am seeing this a growing interest, Ill make this one of my higher priorities on my tasks, give me a week or so and ill get something going!

oh yay Awesome! Thank you so much Matthew! Please update here just in case when you make it

I’ve pretty much got the stealth takedown remade in 4.15, just gonna tweak it and make sure my code is as clean as it can be for it before I record a video. Give me this week to do this and I guarantee Ill have something up by next weekend, maybe sooner!!

Here is the video I created. Hope it helps!!

This looks very promising! thank you very much

Added to learn tuts xDD You are awesome!

of anyone is interested in this topic, I have created a tutorial on this, 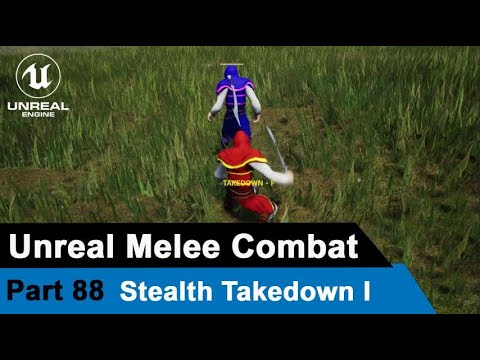