While Unreal Engine is great tool for creating games, have rich tools for animation creation, level editing and many other features lacking in competitor engines.
But one thing - debugging of Blueprints looks broken and unfinished. Don’t know how hard is to implement my requests, but here are the “features” greatly disappointing me. 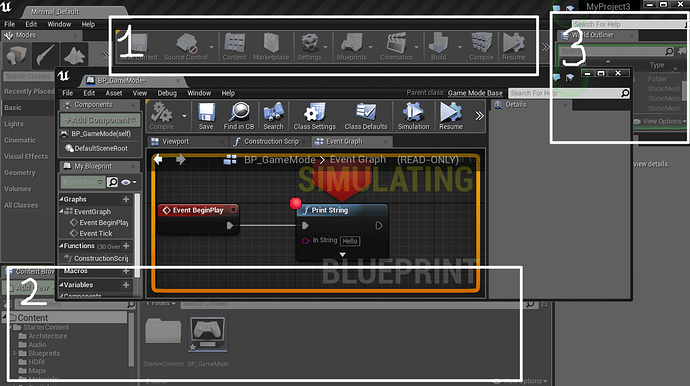 All these sections are disabled during blueprint debug.
[SUB]Region 1 - should be enabled, just as a toolbar of blueprint editor is enabled, so we can at least stop and pause game from that toolbar too (but that one is least important)[/SUB]
Region 2 - should be enabled to make it possible to open other blueprints during debug break, so we can place breakpoints in other parts of the code if needed. That is most annoying - now i need to preopen all needed blueprint before running project or hitting a breakpoint.
Region 3 - hope it can be enabled to browse current world during a breakpoint debug break - to check the current state of the objects (also they should be updated as program passes from one step to another) 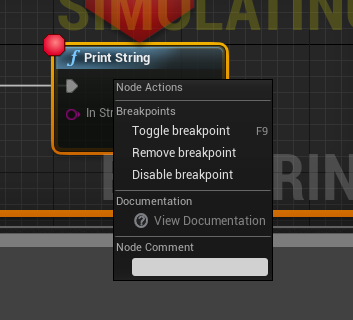 This context menu is greatly reduced in debug mode. Here at least I’d like to see a Goto Code Definition as well as Find References menu items. Goto Code Definition is very useful in C++ projects when you want to break not only on a blueprint node, but also want to set a breakpoint inside C++ function after that.

Blueprint’s Details window can show current values of object properties (or that can be represented as a separate window) with maybe ability to edit property values at runtime.

Pleas Add Ability to customize Current Value of an object displayed in debug mode. Some UObject function which can be overridden for that and returning formatted text would be great.

And some form of Blueprint Callstack window, currently Blueprint Debugger shows some strange vales, and does not show C++ stack (which possibly can be hard to implement, but somehow you generate callstack during engine crash)

And last feature which is not very helpful - is a macro breakpoint - currently it is impossible to break on top of the macro call, debugger always stop inside of a macro. Possibly that can be fixed somehow to.

And one last problem, Stopping a Blueprint does not prevent nodes from being called. For example

Imagine that this function crashes the project - it is a C++ implemented function which do some access violation.
Even if you stopped in blueprint debugger on it, or event if you stopped before it. If you stop project now it still will be called and crash the project. Hope the Stop button can stop the game immediately without calling any other nodes.

Thanks and Best Regards, you are doing great work Epics.

Don’t know about most of this stuff but you CAN disable debugging from the toolbar. You just have to actually expand it to see the stop button.

Don’t know about most of this stuff but you CAN disable debugging from the toolbar. You just have to actually expand it to see the stop button.

Ok, that is least important request, still Resume button can be enabled too.