I am trying to import a skeletal mesh (the master bow rig) to make it so I can see a new arrow mesh in first person view. I was wondering if anyone knew how to do this correctly. And yes, I did watch the scythe video that did not help. My mesh does not import, or if it does import, it does not maintain the proper skeleton to be animated. I am super lost at this point and have no clue what to do. I’m probably a little bit more frustrated that I have to import the entire bow mesh just to replace an arrow mesh… but that is another thing entirely.

I think I know what you mean.

I’ll check and get back to you if I can figure something out.

Perhaps remodel the bow and remove the arrow altogether.

Then try adding your new arrow via this setting: 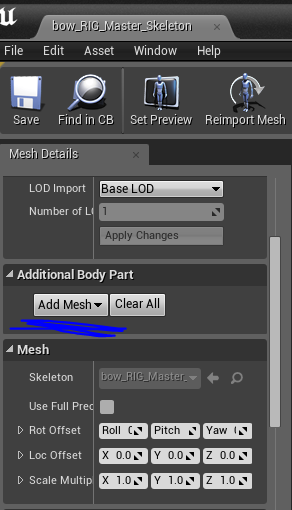 Make it emulate what the previous arrow mesh did inside as well as replacing the actual projectile without fluffing around with too many settings to keep the basics in tact.

Just a theory, don’t take it as gospel

I’ve had this same issue for too long, but I was finally able to import the tpv yesterday. The difference was I made the tpv by using the maya source rigs that they recently released, located here: M:\Steam\SteamApps\common\ARKDevKit\Model And Animation Sources. The thread on it is ARK Dev Kit Update Notes! (Current: 222.6) - ARK: Survival Evolved - Unreal Engine Forums

That did the trick for me, good luck!

Thank you blue, everytime I try to import their source rigs I get an error and don’t know what I did to cause it. Will that import error cause the file to be corrupted when i try to export it back to the DevKit?

And what version of maya are you using?

I’ve found that you need maya 2015 to open those master rigs without any errors. 2014 will open them with an error message, but a complete rig, that I believe works on re-import. 2016 (at least the LT version) has an error that removes nodes, and completely obliterates the rig. To skin my armor though, I used maya 2016 LT, and imported the TPV/FPV fbx rigs rather then the master scenes.

Thank you for the tips BlueFreakQ!!! I’ve tried getting mayay 2015 but am having some difficulties getting C++ x86 installed (it freezes my installer), i will get back to it though so I can get this arrow live… I have a few more ideas for arrows, but first I want to make them visable!!!