I am new to UE, I am trying out UE5 beta preview.

I made a house from another app, and exported it to an FBX file.
I tried importing into Unity3D, had no problems, everything imported fine.

When I tried importing into UE5, I click on “Import all”, and leave other options at default.
I get a bunch of duplicate name errors.

I included link to download house if you want to test it with that (below)
It’s my own asset I created in another app.

Is there a way to import this FBX correctly? All the so called names are auto generate by my other house creator app/tool. So I don’t think I can edit those, plus it imported fine in Unity3D.

I just tried to import your FBX file, and with some tweaks on the FBX import settings, I was able to import the whole mesh correctly:

I’m not really sure why it behaves that way with Nanite, but you can enable it back after it was correctly imported with the checked transform vertex to absolute. That’s probably the issue you had, although it has nothing to do with the fact that Unreal renamed some mesh parts. 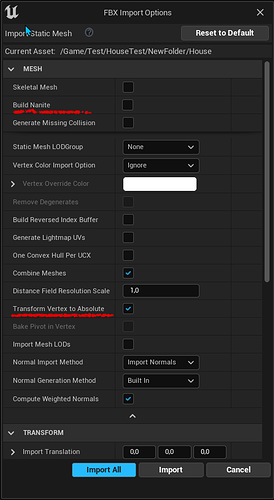 What is the proper way to drag the “one” thing, the house, into the scene view?
Since there is no one file icon representing the imported FBX file after import finishes.
(hope my question made sense)

First, there are two basic ways of importing a mesh (or collection of meshes) in Unreal: the import asset (either by dragging your FBX file into the Unreal Content Browser or by clicking “import” from the content browser/ drawer top menu) or the Import into Level (from File > import into Level).
I personally never use the import into Level and always prefer to import each FBX as a separated mesh & combine them in Unreal. But let’s see what exactly are those two options:

Thus, the Unreal Import into Level way is a bit similar to how Unity is importing FBX files.
In fact, each imported FBX in Unity is automatically keeping the file hierarchy and, when you drag it on the Hierarchy Window or Scene View of your Unity project, it’s instantiated as a prefab, although it’s more a pseudo-prefab with no ability to modify it (it is recognized as a prefab when you check with GetPrefabType, but you can’t change anything inside it).
Now, in Unreal, although Prefabs and Blueprints have major differences, if you want to keep things simple, the Unreal Blueprint is still the closest form to a Unity’s Prefab. The only difference with the import into level is that it creates a real Blueprint, while Unity is making an unchangeable pseudo prefab.

However, both in Unity and Unreal, importing a very large amount of meshes is definitely not the best way to do it, mainly because of performance issue (& also to keep a simple and understandable Mesh structure). So you need to keep the smallest amount of meshes & materials.
See this even in Unity’s doc:

Now, from what I understand, you used a house generator app. I always make things from scratch & I personally never use the Import into Level feature in Unreal.
But what I’ll do in that case entirely depend upon how you will use that mesh. If you need to reuse some parts of the house (like doors, windows, walls and so on), then I will import the full FBX into Blender (or any full-fledged DCC), export each reusable part individually and put them together in Unreal, while making a Blueprint when I need to have some interactions (like a Blueprint for the door).

Otherwise, if you just need to display (render) this house for a simple showcase/ visualization project and don’t have to use any interaction (like opening doors or windows), I would only import the FBX as a single combined Mesh, create Materials and that’s it.

At last, you still have a third option, the Datasmith plugin, but from what I know, it doesn’t seem to work properly on the Early Access version of UE5, you need to wait for the final 5.0 version.