Imported textures are too bright

Hello,
as I mentioned above, my textures are too bright after I imported them into UE4. I also tried to untick sRGB. 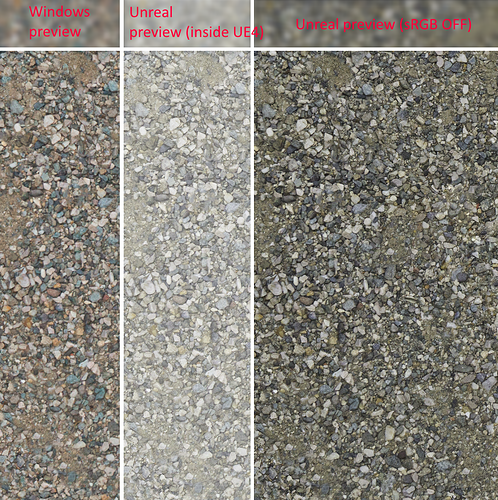 Did you create a valid material for them using all the nodes? or did you just add a texture into the diffuse node?

metal/specular/AO/Roughness need something on them etc. as just a basic texture and nothing else it will be bright as it will be very reflective and not look very good.
Texturing in UE4 requires use of many nodes for a good effect

There is some really cheap software out there that can create these for you, one is even on Steam in the software category but i forget it’s name, but it creates Normal Maps, AO maps, Specular maps etc for you if you have the patience to tweak the slider bars.
Substance designer is on the NOT cheap side, but tends to create a better result, but is also more complicated to use.

I forgot to say, that this isn’t a material. It’s a Texture2D

And I also tried to reduce the post effect. But this only changes look of my materials in the viewport.

Well I’ve managed it by, instead of dragging my psd into UE4, I have exported the texture as tga 32bit.

i had this issue but discovered it was because i accidentially imported a 16 bit png instead of the supported 8 bit. by default max saves its pngs as 16 bits, so thats how this can creep in