Importaining a terrain from Blender into Unreal engine?

Hello, i’ve been looking around for a day try to find a method on how to import a terrain from blender into unreal engine…

I can’t find anything.

Does anyone know how to do this or have a in-depth tutorial?

Thank you very much:)

You have to convert it to a heightmap -> then import it with the landscape tool: How To Create A Height Map In Blender 2.6 - YouTube or http://wiki.blender.org/index.php/Doc:2.4/Tutorials/Textures/Maps/Creating_a_Heightmap_from_a_Plane (should be a raw16 file)

I’m struggling to create a heightmap, when i render it does not show a heightmap?

The technique showed in the video unfortunately just works with blender 2.6 (and probably till 2.7 -> havent tested it ^^). After you have saved your heightmap, you have to open it with photoshop/gimp + convert it to a raw16

My pipeline for making the heightmap in blender:

I feel your pain,

I’m also having trouble getting a height map out of Blender 2.7.(Or any other application for that matter)

Seems like i’ve tried at least 4 different applications to generate heightmaps for UE4 and they are all a massive pain in the butt.

Generating a complex terrain? No problem. Exporting a black and white image? Sorry, thats just too complicated. But if you jump through these 43 hoops, spin around and touch your head, it might render one out.

So frustrated by the lack of documentation for exporting height maps. So far i’ve wasted 3 nights of ‘working’ to get a terrain into UE4.

My kingdom for a rock solid method of getting height maps out of blender 2.7

Now if you’ll excuse me, i’m going to go back to smashing my face into the keyboard.

I don’t understand what everyone is having a problem with- heightmaps are greyscale images. That’s it. You can make them in everything from MS paint to MAX, Photoshop, blender,etc. You could even draw one with a pencil on a napkin, take a photo with your cellphone and import it.

For blender, planar map a b&w gradient and render to file.

UE4 has nothing to do with image creation, go to terrain tab, import heightmap. Hit the button- profit?

There is nothing indepth required.

EDIT- I spent an hour putting this tutorial together when I should have been resting but really wanted to show people the images don’t have to be super refined to get a half way decent result. Are you going to ship a game with this quality? No. But once it’s not longer a barrier, that’s when you can start to learn other things. 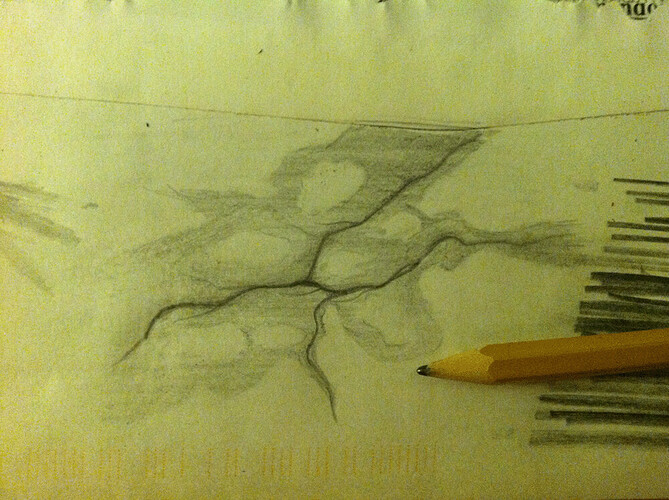 You’ll need a pencil, an envelope (scrap of paper, etc.), some sort of camera (iPhone was used here). 1: Sketch out your height map with the pencil. In this case I was making a river valley in a desert, at least that’s what I was picturing. 2:...

So I managed to get my height map out of blender (and my face out my keyboard) following the tutorial that Fighter linked to and imported it into UE4. Thanks Fighter!

The problem is it, the height map isn’t accurately displaying the terrain.

If I export the terrain as a .obj and import it into UE it displays exactly as it does in Blender, but the height map generated landscape seem to bulge out compared to the obj.

The peaks don’t look as steep, and the edges of the map fall sharply compared to the gentle falloff of the obj.

The linear blend used in Blender was completely standard but doesn’t seem evenly gradated. I was thinking of just manipulating the linear blend to try and closer match the obj, but i’d rather work out what i’m doing wrong.

Anyone else had scaling or shape issues importing height maps from Blender?

Thanks for your help,