I’ve watched tutorials here and there but… it doesn’t work.

How to import clothes that have morph targets and link them to the character?

In tutorials, clothes seem to be part of the character skeletal mesh. But…

So… what is the workflow to import clothes and to add them to the character, when :

I’ve tried a lot of things but now, I run out of ideas.

Depends on what you are going for.
as separate, interchangeable items, open the character, add the cloths as a separate skeletal.mesh and use masterpose at begin play to sync.
both meshes require the same skeleton. 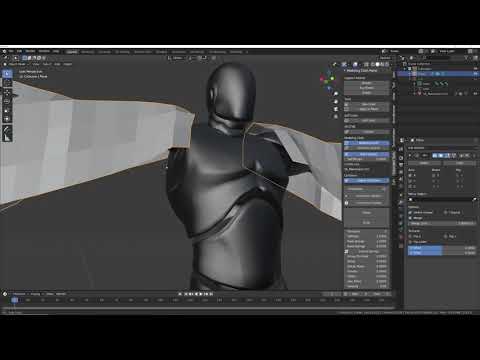 As an “all in one”, just select the 2 in blender and ctrlJ to merge.
keep the materials separate as you will ne using the material to isolate the cloth and add some very light values to it in oder to get it to animate.
usually, remove any underlying geometry to prevent clipping.

Unfortunatly, I still have the same problem, I still can’t set the morph target value on cloth and the character mesh disappears as soon as I try to set a cloth via blueprint… :-/

It be using the UI BP or the character BP the behavior ends to be the same. As individual skeletal mesh (the pink line), the morph targets are available, it considers the morph target animation but… the only “set morph target” BP option is the one related to animation and not skinned mesh. But only for clothing, when it is the character, I can set everything properly.

If I put cloth as characters that shares the same skeleton… it will behave as a character, not as a cloth or it is here I’m wrong? I will still be able to set cloth in a character BP as a cloth even thought I don’t have character body mesh in the same BP?

Hum… Not clear? I will try to ask an other way XD
If I have :
Body (character) BP
Cloth (character) BP
Will I be able to set cloth BP as cloth (body child) and set it to the body with the proper behavior?