I’m having a problem with a game I’m setting up. So far, all I have are a standard BlueGuy character model and some BSP volumes marking out a tiny landscape of maybe 500x500 Unreal Units in total. However, I’m getting dreadful framerates.

Using the stat unit command, I found my values for Frame, Game and Draw to average at 33 ms, 7.00 ms and 0.15 ms respectively. When I maximize the window, the Frame drops to 46 ms on average, resulting in a quite slow experience. However, there is no value for ‘GPU’ as there should be (I found that there should be from [this learning resource page][1]).

Using the profileGPU command doesn’t yield any results for the GPU either, since the window is blank. It’s almost like Unreal doesn’t know how to profile my GPU or I don’t have one. Here’s a screenshot of the profiling tool: 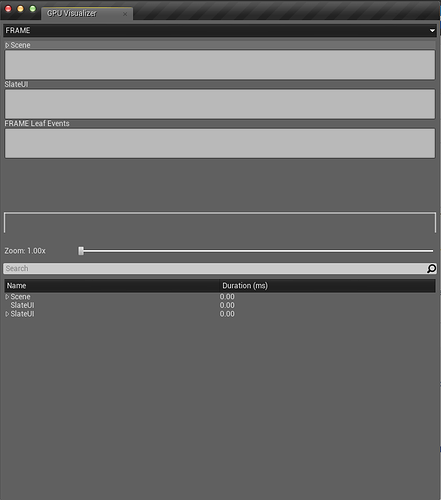 My system specs are as follows:

I hope you can help me with this. Making a game I can’t even playtest is… hard. Thanks.