This is something I’ve been working off and on with for a long time now, but I just can’t figure out how to get it all to work. UE4 tutorial: How to make a simple puzzle game - YouTube I essentially used this video to create the tile blueprint and then did an Actor Class Blueprint that has a custom event with a timeline that moves the object, a cube that’s been flattened and widened out to be a big door in this instance, down into the ground so the player can pass. How to open a door when the puzzle is completed? I’ve tried using this specific thread to accomplish this, but it’s just not working no matter what I do. Primarily, I’ve tried the function within the level BP to do this. Maybe it’s because I created children classes of the original Tile class blueprint and used that to then try to fire off the function code in the level and then trigger the custom event in the relevant door, but so far it has not worked. It almost seems like it would work, but for some reason, and this I cannot figure out, it’s not able to get the target for the call of the event for the door, see the 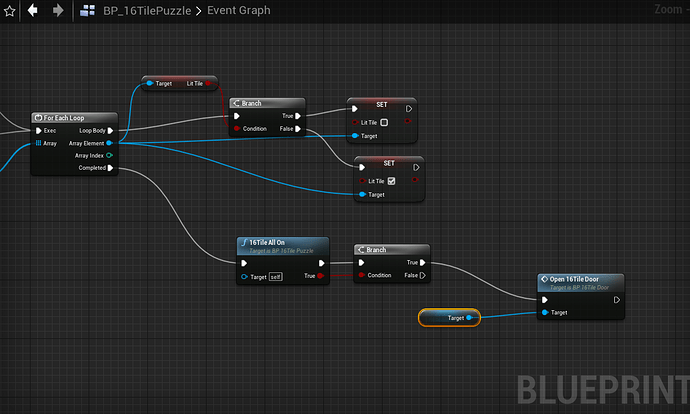 TileDoorPuzzleStuff1129×678 108 KB
screenshot for where I’m currently at. And yes, I am specifically using 4.26 because it’s the ‘most stable version of UE4’, though I disagree with that given the issues I’ve had, and its for a project with others, so the engine will not be getting upgraded to 4.27.

Small correction actually here at the end, but I also cannot call in that function from the level BP in my Tile BP that’s mentioned in that linked forum post, so perhaps if I could get a way to call that exact function there, it would work? The reason why its in the screenshot is because I created the function in one of the children for the tile BP.

I think I see a lot of people getting confused by ‘a’ tile and door puzzle tutorial on utube.

Not really what tutorials are for?

Your problem, in that loop, is you’re inspecting each tile and then setting them, again. Surely they are set elsewhere?

Anyway, the solution is to just use a bool variable for all of them to check