I made Skyrim in Unreal Engine 5! 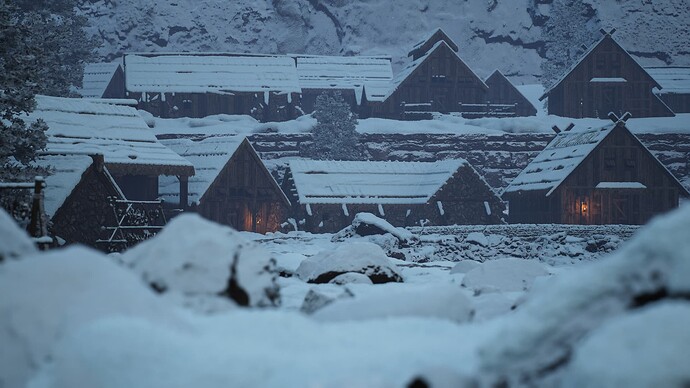 The city of Dawnstar from Skyrim, re-made in Unreal Engine 5 – almost eleven years since the game first came out!

I’ve been using this scene to practice my snow workflows – and stress testing a very heavy Nanite scene, along with difficult low lighting conditions for Lumen – and it actually went far better that I was expecting! This entire scene is running dynamically at around 40-45 fps on the ‘high’ preset on an RTX 3060.

Hope you’re having a great week

I’m already such a sucker for winter villages, but with the addition of the mountains and the northern lights, I’m absolutely enchanted by this scene. It’s breathtaking and genuinely beautiful.

@PresumptivePanda Thank you so much!

@LTowers95 , came across this on YouTube and it brought back so many great memories of playing Skyrim when it first came out. Great work!

Just when I thought that Skyrim could get no more awesome, @LTowers95 shows off in breathtaking, jaw-dropping fashion Dawnstar in UE5! I’m absolutely floored at how gorgeous this looks! I wonder how it would look/run on my RTX 2080.

Eleven years later, and Skyrim is still strongly relevant. Right on time for the upcoming winter season. Unprecedented work, my friend! I tip my hat!

@Get_DOVAH_it Thank you so much! And yeah - Skyrim still chugging along just fine! As for a 2080, it would probably run better than my 3060 tbh - I was getting around 40-45 fps at 1080p on ‘High’. Not too shabby, considering just how heavy this whole scene was…